It Happened on OCTOBER 16

CHRIST’S TOMB TOOK A BEATING OVER THE CENTURIES 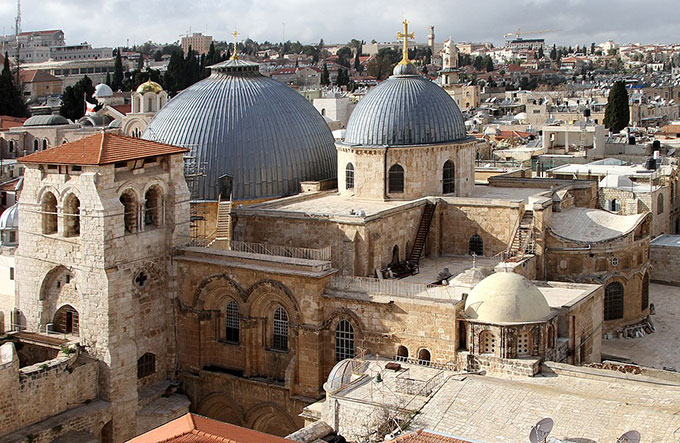 Jesus was crucified at Golgotha, a hill adjacent to Jerusalem, probably in AD 33. His lifeless body was taken down from the cross and laid in a nearby tomb. On the third day, he rose from the dead. Human nature being what it is, the scene of the miracle became a place to visit. However, tragic events unfolded in the next forty years. Seeing trouble on the horizon, Christians left Jerusalem before in 70 the Romans captured it, destroyed its temple, and killed or enslaved most of its inhabitants and defenders.

Fast forward two hundred and fifty years. The site of Christ’s tomb had been lost to the public. Constantine had become the first pro-Christian Roman. He sent his mother, Helena, to seek lost sites. Through investigations and inquiries of Jerusalem’s inhabitants, she located the supposed tomb of Christ. Whether the site was really his tomb cannot be asserted positively. However, it met the general details of the biblical account. Helena experienced visions and miracles that convinced her she had discovered the right place, and even claimed to have found the cross on which Jesus was crucified. Constantine erected a church over the sepulcher, splendid with gold and marble. Its dedication took place in 336.

During the following centuries, Constantine’s edifice was a pilgrim destination because of the holy tomb it housed. But conquerors and earthquakes damaged the building gravely. The Persians burned the Church of the Sepulcher in 614. Abbot Modestus restored what he could. For close to four centuries, Christians continued to visit the shrine.

In September of 1009, Caliph Al-Hakim bi-Amr Allah, a Muslim purist, ordered the destruction of all churches, synagogues, Torah scrolls, and other religious artifacts throughout his caliphate, which included Syria, Jerusalem, and Egypt. The Church of the Holy Sepulcher was among the casualties. Yahia ibn Sa`id, an Islamic historian, wrote: “...the holy deed commenced on Tuesday, the fifth day before the end of the month of Safar of the year 400 of the Egira.” Converting from the Muslim calendar places the destruction on or about this day, 16 October 1009. The workmen completely destroyed the church and even hacked into the stone beneath it, but the sepulcher itself was not completely destroyed, because, as the upper parts fell, rubble blocked the workmen from accessing the lower parts. An entire generation of Christians were barred from visiting the site.

Following negotiations with the Christians of Byzantium, Caliph Ali az-Zahir (Al-Hakim’s son) agreed to restoration work, which was completed in 1048. In the following century, Crusaders rebuilt the pilgrim attraction. Fire destroyed their structure in 1808 but Christians rebuilt once more in 1810.

By the beginning of the twentieth century, archaeologists were not sure that the site claimed as Christ’s tomb was the site of Constantine’s church. However, when they tested mortar samples attached to the original limestone, analysis gave a date compatible with Constantine’s construction.

Greek Orthodox, Roman Catholic, Armenian, and Coptic churches share control over the sacred complex and conduct its religious services. However, the Palestine Authority seeks control of the Church of the Holy Sepulcher, which would allow its leaders to exert increased political pressure on the governments of Christian nations.

*Islamic months vary in length according to sightings of the moon. I have not been unable to ascertain whether Safar had an extra day that year. If it did, five days before the end of the month would be the 24 Safar. According to Tarek’s universal converter, the 24th of Safar 400 would be the 16th of October in the Julian calendar that was then in Western use.