It Happened on OCTOBER 13

BEZA RECOVERED TO GUIDE THE SWISS REFORMATION TO NEW HEIGHTS 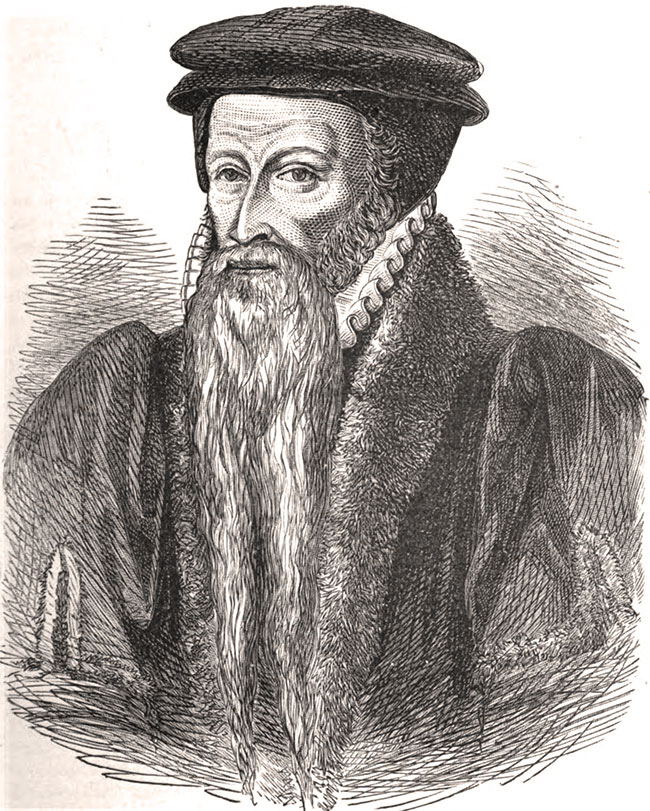 [Above: Theodore Beza [public domain] from Lives of the Leaders of Our Church Universal by Ferdinand Piper, trans. and ed. by Henry Mitchell MacCracken. Chicago: Jay Andrews & Co., 1879]

In 1548, Theodore Beza became seriously ill. Not yet thirty years old, he stared death in the face. Looking upon his recent conduct, he was ashamed. First was the matter of his faith. At heart he was Protestant but, because he got his income from two benefices of the Catholic Church, he had hidden his beliefs. He realized he was living a lie. Second, he had secretly married Claudine Denosse. Open marriage would cost him those same benefices. Third, he had frittered his talents writing worldly Latin poetry. His reflections during his sickness changed his life. As he wrote:

What could I, unhappy, do with only God’s fearful judgment before me? What then? After infinite pain of my body and soul, the Lord pitied his fickle follower, comforting me so that I no more doubted his pardoning grace. Amid a thousand tears I abhorred myself, sought mercy, renewed my vows, openly acknowledged his true church and worship. In short, I gave myself to Him wholly and entirely.

Before he had fully recovered, he left all he owned and fled with his wife to Geneva. Although he had no prospect of work, he married Claudine publicly. Happily, leaders in Lausanne asked him to teach Greek and in November 1549, he was sworn into his new job. The school prospered through his efforts. Beza turned his talents to translating psalms into French, and explaining the Bible for ordinary people. He wrote extensively in behalf of the Reformation. At one point he contracted the plague and once again faced death. Prayers rose in his behalf throughout Switzerland. He recovered.

An older brother and his father attempted to turn Beza back to Catholicism. They held out dazzling offers of preferment. Although it pained him to reject his family, he could not turn back. Late in his life, he also rejected a similar proposition from Francis de Sales, accompanied by the promise of a large annual pension. Beza is said to have replied, “Go, sir, I am too old and deaf to be able to give ear to such words!”

The remainder of Beza’s life, he labored as an educator, a Calvinist theologian, a mediator between reformation factions, and an advocate in behalf of persecuted Protestants. He upheld a Protestant view of the Lord’s table before royalty at the Poissy Conference. He also counselled reformers in other lands and poured out hopes for reform.

After Calvin’s death in 1564, Beza became the leading religious figure in Geneva. Much of his energy went to providing for French refugees who thronged Geneva during the Huguenot wars. Those numbers swelled after the 1572 St. Bartholomew’s Day Massacre, in which Catholics made a surprise attack, butchering thousands in their homes or on the streets.

After the death of Claudine, he married again at seventy to widow Catharina del Piano and lived another sixteen years. During his last months, two ministers visited him each day to help as needed. On this day Sunday, 13 October 1605, he woke feeling well enough to get dressed, have morning prayer, and walk a little. He asked his visitors about the condition of Geneva but had barely heard their reply before he suddenly slumped down unconscious. Within minutes he breathed his last.

He left behind him many useful writings: among them a life of Calvin, a French Psalter, an accessible statement of faith, and a highly-regarded French translation of the New Testament. All Europe felt the influence of his pupils.