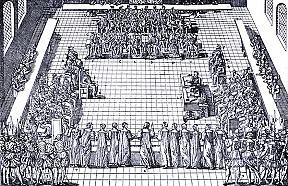 On this day, Tuesday, 9 September, 1561, a conference between Catholics and Huguenots (French Protestants) opened at Poissy, France. Perhaps the most famous of the Protestants was Théodore de Bèze (Beza). Local feeling ran so high against the Protestants that they were given an armed escort to the convent where the meetings were to be held. The Catholic delegation was already present along with King Charles IX and his mother Catherine.

The king spoke a few words before the Protestants were admitted, begging the prelates to eliminate abuses from the Catholic church and to refute the reformers by sound reasoning but to give them a hearing before judging them.

When the reformers were brought in, they were made to stand as if they were prisoners at the bar. At their request, Beza asked the king for permission to open with prayer. He knelt and prayed and a deep hush came on the assembly. When he rose again, he stated the Huguenot position on justification, Christ’s work, and the sacraments. All went well until he reached the paragraph that forms today’s quote. Then his opponents drowned him with cries of blasphemy.

“If then some one asks us, whether we make Jesus Christ absent from His Holy Supper, we answer that we do not. But, if we regard the local distance (as we must do, when His corporeal presence and His humanity distinctly considered are in question), we say that His body is as far removed from the bread and wine as the highest heaven is from the earth; since, as to ourselves, we are on the earth, and the sacraments also; while, as to Him, His flesh is in heaven, so glorified that his glory, as says St. Augustine, has not taken away from Him the nature, but only the infirmity of a true body.”

Henry Martyn Baird. The Rise of the Hugenots. London: Hodder and Stoughton, 1880.