It Happened on JANUARY 26 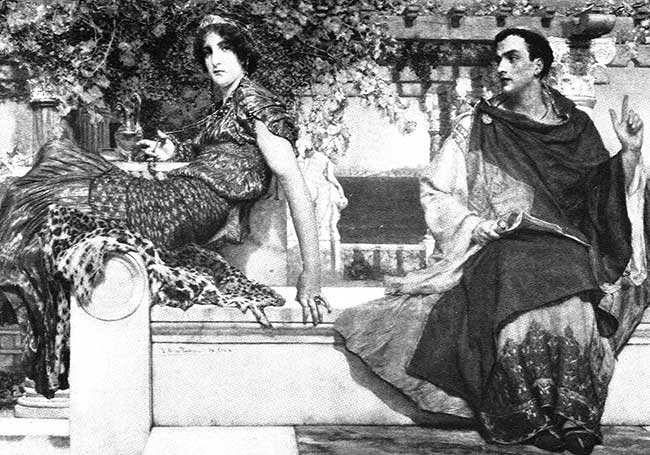 [The Conversion of Paula (shown with Jerome) after Tadema, in John Lord, Beacon Lights of History. New York: James Clarke, 1886.]

Most of what we know about Paula comes from the pen of Jerome. The two were close associates for many years. They even lived in adjacent monasteries at Bethlehem. Jerome mentioned innumerable daily letters he had written to Paula and her virgin daughter Eustochium.

Following the conversion of Constantine to Christianity near the start of the fourth century, and the even more ardent Christianity of Emperor Theodosius I toward its close, some upper-class Romans adopted asceticism. When Jerome returned to Rome in 382 after a long absence, he came into contact with a group of wealthy Christian women who invited him to mentor them. Marcella was the leading figure in the group but other notable names were Paula and Melania. The women in the group practiced asceticism, discussed Scripture, sang psalms, and gave bountifully to charity. Fluent in Greek and Latin, Paula also learned Hebrew so she could sing the psalms in their original tongue.

Paula had been widowed at thirty-two and her four daughters and son were left fatherless. One daughter, Blessila, was herself widowed at eighteen years of age. Following a serious illness, Blessila joined the ascetics. She fasted so strenuously that she died. Roman society blamed Jerome and said he should be ousted from Rome. After Pope Damasus, his patron, died, Jerome didleave Rome for the Holy Land. Paula joined him a month later, leaving her underage son, who pleaded with her to stay, and a daughter of marriageable age who begged her to remain at least until she was married. Eustochium accompanied her. Later, Paula’s granddaughter, also named Paula, joined the nunnery Paula would found at Bethlehem.

Paula, Jerome, and Eustochium toured sites in the Holy Land. Paula wrote full descriptions to Marcella. (Over the years, Jerome several times urged Marcella to join them, but she declined.) The party then visited Egypt, where Paula wished she could join the desert monks. Afterward they settled into monastic routines at Bethlehem. For Paula, two attractions of life in the little Eastern city were its simplicity and the absence of vast edifices built on the misery of slaves: “Where are houses decorated by the sufferings and labors of condemned wretches?” She funded Jerome’s Bible translation and offered hospitality to growing numbers of religious pilgrims. She lavished so much wealth supporting these endeavors that she plunged Eustochium into deep debt.

Meanwhile she assisted Jerome in his work of translating the Bible into Latin, furnishing him with texts and editing and copying his output. The project seems to have been her idea, although Pope Damasus had also pushed it. With her language skills, Paula could perhaps have done more of the actual work than she did, but Palladius, a contemporary, said Jerome hindered her out of jealousy and “induced her to serve his own plan.” Whatever the stresses between them, the pair presented a united front against the followers of Origen who had drifted from orthodoxy as defined at Nicaea.

Paula died on this day, 26 January 404. She was fifty-seven years of age. The church at Bethlehem and many other Christians of the Holy Land gathered to carry her to her resting place. Future ages would remember her principally for the support she gave Jerome in the great translation project that produced the Vulgate Bible used by the Western church for fifteen centuries.

Check this link for more on Women of the Early Church