It Happened on JANUARY 24

DUTCH ARMIES FACED SPANISH IN THE LOPSIDED BATTLE OF TURNHOUT 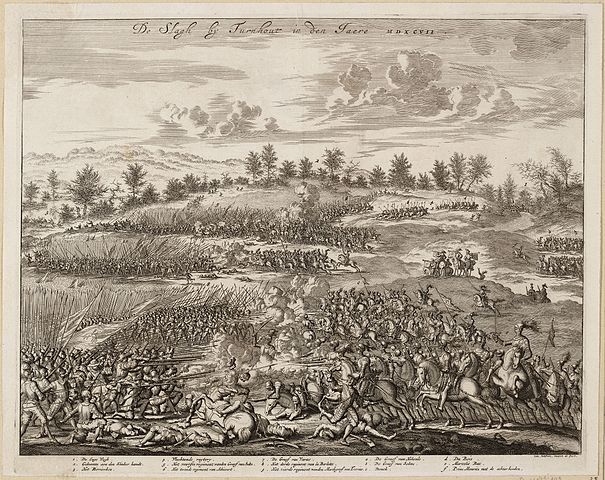 In the seventeenth century, Spain was the most powerful nation in Europe, controlling a world-wide empire. Among its European possessions were the little states of the Walloons, Flemings, Dutch, and Luxembourgers now comprising Belgium, Luxembourg, the Netherlands, and the département of Nord, France.

The people of the low countries resented Spanish rule and resisted, resulting in an eighty-year war (1568–1648). Economic, political, and religious factors were involved. In the Dutch states of the north, Calvinism had taken hold following the Reformation. When Spain moved to create an archdiocese with many new dioceses and bishops, political leaders pushed back, fearing the arrangement would undermine their power because the bishops would be aligned with Emperor Philip II of Spain. Political leaders (still mostly Catholic) and the Calvinists feared increased operation of the Inquisition—the political leaders because of its adverse effect on unity, Calvinists for dread of cruel persecution.

Between the onset of hostilities in 1568 and a temporary truce in 1609, each side saw some gains. The southern states, which had remained Catholic, broke from the northern which were increasingly Calvinist, weakening the position of the rebels against Spain. However, the provinces of Holland and Zeeland held a strong defensive position against the Spanish armies under the Duke of Parma, which had recaptured the southern provinces.

One of the many battles of the eighty years’ war took place on this day, 24 January 1597.  Archduke-Cardinal Albert placed Count de Varas in charge of a Spanish garrison at Turnhout near the Dutch-controlled-city Breda. Varas’s forces included some of the finest Spanish regiments. Prince Maurice of the Dutch alliance knew that Varas was a political appointee with little experience. Acting quickly and in secret, he gathered English and German allies, amounting to five thousand troops and eight hundred horsemen, and marched twenty-five miles through miserable conditions, with the roads all under water from a recent thaw, to exploit the weakness of the Spanish leadership. Varas learned of Maurice’s approach only the day before the battle.

Maurice arrived by night and found the Spanish well posted with a narrow bridge between them and himself. He put his staunchest forces at the bridge in case the Spanish attacked. Varas, however, conscious of his inexperience, and against the advice of his subordinates, began a quiet retreat before dawn toward the fortified town of Herentals. Maurice soon discovered what was happening and, while aware Varas might be setting a trap, immediately sent most of his cavalry in two parties under Sir Francis Vere and Count Hohenloe to slow the Spanish retreat and ambush them, retaining a few cavalrymen with himself. Hohenloe got between the Spanish and a narrow defile through which they had to pass. The entire operation covered three hours before the final, sharp engagement, and is more complicated than our short account suggests.

In the battle that followed, the Dutch introduced a new tactic. Maurice replaced the Cavalry’s lances with carbines (a short musket). When the Spanish attempted a charge, Hohenloe’s horsemen fired on them from close range, inflicting terrible damage; then, opening a path through their own center, these cavalry wheeled upon their Spanish counterparts from two sides with swords. The Spanish horsemen fell back, trampling their own infantry. Maurice and Vere came up with their horsemen in time to take advantage of the confusion. The result was utterly lopsided. Two thousand Spanish died, including Varas, and Maurice’s army captured another five hundred. The Dutch side lost only ten killed and about a hundred wounded.

The military adage proved true: an army of lions led by sheep will fail; an army of sheep led by lions will prevail (although it is hardly fair to describe Maurice’s veteran followers as sheep). Among the results of this Dutch victory was a hardened resolve on their part to never again submit to Spanish rule. Maurice became even more renowned as a military leader and would play an important role in the subsequent politcs of the Netherlands. The English rejoiced, because once again they had been instrumental in defeating their Spanish rivals. And a kinder policy toward captives was implemented by both sides because, after making a harsh threat because of some misinformation, Maurice courteously returned the Spanish captives to the Archduke. Some writers claim the hymn “We Gather Together” was written as a result of the battle. However, its text was first published twenty-nine years later.

For more on the Protestant Reformation see This Changed Everything