It Happened on JANUARY 15 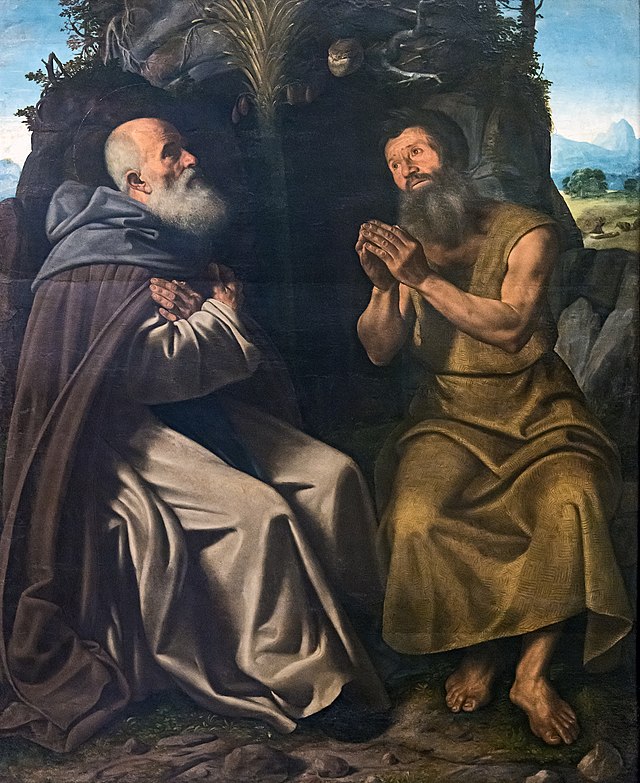 Incredible tales are told of saints in tradition. Vying for a place among the most improbable is the story of St. Paul of Thebes. Jerome wrote his life around 375.

According to Jerome, Paul was a young man with a sister living in the Thebiad, a region in the southern half of Egypt. Their parents died when Paul was fifteen, leaving him a substantial inheritance. When persecution broke out against Christians, he made his way to a secluded house. However, his brother-in-law, coveting Paul’s inheritance, planned to betray him to imperial persecutors. Learning of this, Paul fled into the desert. In his wanderings, he discovered an abandoned silver mint with a small stream of water and a palm tree. He made the place his home. Sustained by the fruit of the tree and making his clothes from its fiber, he resided ninety-seven years.

When Paul was one-hundred-and-thirteen years old, a ninety-year-old monk named Anthony received a vision that a hermit more venerable and holy than himself was living in the Egyptian desert. He was commanded to seek him out.

Directed by a centaur and assisted by a satyr and other fabulous creatures, Anthony found his way to Paul. Paul requested news of the world from which he had so long been absent. While they talked a raven flew down with a whole loaf of bread. Paul explained that God sent a raven with half a loaf each day but, seeing he had company, had sent a whole loaf this time. The two argued for hours who should break the bread, each insisting on the priority of the other. Finally, they agreed to each seize an end and pull it apart.

Paul declared that he must soon die. Bishop Athanasius of Alexandria had given Anthony a cloak. Paul asked his visitor to fetch that cloak to wrap his body in. This was a ruse so that he could send Anthony away and allow himself to die alone. Anthony undertook the four-day round trip.

Asked by two of his disciples where he had been gone so long, Anthony replied, “Woe to me a sinner! I do not deserve the name of monk. I have seen Elias, I have seen John in the desert, and I have really seen Paul in Paradise.”

He then closed his lips, beat upon his breast, and brought out the cloak from his cell. When his disciples asked him to explain the matter somewhat more fully he said, “There is a time to keep silence, and a time to speak.”

While still some distance from Paul’s dwelling, Anthony saw him ascend among bands of angels, choirs of prophets, and apostles. He hurried to the hermit’s shelter and found him dead. The traditional date given for this event is today, 15 January 341.

Chanting Christian words, Anthony carried the old saint’s body out to bury it. However, he had no implement with which to dig the grave. He did not wish to leave Paul’s corpse for the four days it would take him to travel to his own abode to fetch a tool and return. He therefore made up his mind to die beside Paul. However, two lions arrived, dug the grave, knelt for Anthony’s blessing, and returned into the wild. Anthony supposedly reported these things to his disciples, and twice a year, on holy days, donned a tunic Paul had woven from palm leaves.

Jerome urged his wealthy readers to compare their condition with Paul’s. “He, though naked, yet kept the robe of Christ; you, clad in your silks, have lost the vesture of Christ.”

Apart from Jerome, no author of the period mentioned Paul. Athanasius, who wrote the life of Anthony fifteen years before Jerome’s story about Paul saw the light, mentioned nothing of Anthony’s alleged interaction with the prior saint.

In light of the mythical creatures with which Jerome populated his tale, and the improbable events he stitched through it, we can be pardoned for taking the whole with a grain of salt. Yet the tale gives a peep into the trauma persecution caused, and it captures the impression the early monastics made on the church.