It Happened on JANUARY 16 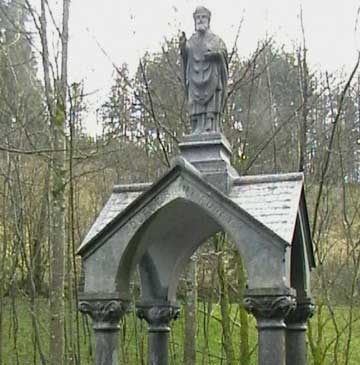 In writing chapter nineteen of the third book of his famous Ecclesiastical History, Bede introduced his readers to one of his many fascinating historical figures. Fursa (or Fursey), a holy man “built a monastery among the East Angles” and received visions. Bede’s account was based on an anonymous life of the saint, whose chronology is not clear; but Bede (who wrote in 731) was acquainted with an old monk who had met Fursa many years earlier.

Says Bede, “This man [Fursa] was of noble Scottish blood, but much more noble in mind than in birth. From his boyish years, he had earnestly applied himself to reading sacred books and observing monastic discipline, and, as is most fitting for holy men, he carefully practiced all that he learned to be right.”

Born in Ireland near the opening of the seventh century, Fursa was baptized by his uncle, Brendan, the famous voyaging saint. Fursa gave himself to Scriptural studies and built a monastery, possibly at Killursa in County Clare. Around 623, while visiting relatives, he experienced the first of several visions. During an out-of-body experience he heard a choir of angels sing “The saints shall go from strength to strength.” As an angel returned him to his body, he inquired what was going on and was told he would be welcomed later when he had completed his assigned task. As he regained his body he heard angels singing “The God of gods shall be seen in Zion.”

Three days later, he slipped into a more prolonged trance in which he encountered angelic and demonic beings. One of the angels who appeared to him said, “Do not be filled with fear; you have a defense.” Satan slandered him, seeking his eternal destruction.

After seeing angels and demons battle, Fursa saw a great fire and in alarm said to the angel, “Lord, behold the fire draws near me.” His angelic escort reassured him that the fire could only touch anyone where they had indulged in sin: “What you did not kindle shall not burn you; for though this appears to be a terrible and great fire, yet it tries everyone according to the merits of his or her works; for everyone’s concupiscence [lust] shall burn in the fire; for as everyone burns in the body through unlawful pleasure, so when discharged from the body, that person shall burn in the punishment that he or she has deserved.” In other words, the fire was a purgatory. After receiving instruction, Fursa was about to return to earth when he received a burn for having accepted a gift from a pagan. At the close of these sights, an angel told him, “If you are working beneficial things in your every step to the end, we will see you, and, in this manner, take you up with joy.”

Deeply impressed, Fursey preached through Ireland for a year. On the anniversary of his great visions, he again had a vision in which he learned he was to spend twelve years in the work of preaching. For another decade he preached throughout Ireland (Hibernia). Sick of the admiring crowds who intruded on him, he left his homeland. Staying a short time on an islet off the coast of Ireland, he then traveled to East Anglia, becoming the first Irish monk known to have carried the gospel to England. King Sigebert granted him acreage on which to establish a monastery. Before he could build it, at the completion of the twelve years that had been foretold, he fell sick and received his last recorded vision. Angels urged him to press on with proclamation of the gospel. With this admonition in mind, and recalling from Scripture that no one knows the day or hour of Christ’s return, Fursa hurried to build a monastery at Cnobheresburg, perhaps around 635.

Accounts of visions such as Fursa’s appealed to the medieval imagination. Seven centuries later, Dante would write a trilogy based on this genre—the Inferno, Purgatorio, and Paradiso. A fourteenth-century English recluse, Dame Julian of Norwich, described sixteen Showings[revelations] of the world beyond ours, even more elaborate and more famous than Fursa’s.

Fursa left Cnobheresburg around 643 and lived as a hermit for a year. With pagan invasions looming, he left England altogether around 644. He was kindly received in Gaul by King Clovis of Neustria—or rather by the mayor of his palace, Ercinwald, Clovis being underage. The visionary monk built yet another monastery, this one at Latineacum (Lagny-on-the-Marne, near Paris).

For the remainder of his life, he preached and founded churches. While on a journey in the company of the king and his nobles, Fursa again became ill, dying on this day, 16 January c. 648* at Mézerolles, France—a village sometimes known as Forsheim because of him. Taken by Ercinwald to be placed in a shrine at Péronne, contemporaries claimed Fursa’s body remained uncorrupt after death, emitting a sweet smell, testifying to his holiness.

* Or as late as 650—scholars disagree about dates of his life.

For more on Dante, see Pioneers of the Spirit: Dante