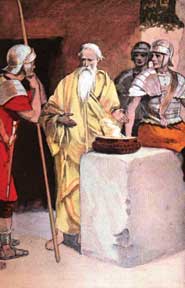 Polycarp feeds the soldiers who have come to arrest him

Eighty-six years have I served him

Warned that his arrest is impending, elderly Bishop Polycarp has left Smyrna and hidden in a farmhouse. The threat on his life is real; Smyrnans have recently executed several Christians for their faith. Now a pagan mob is demanding the bishop’s life. Smyrnans are fiercely loyal to Rome and to the old gods. “Kill the church leader,” they reason, “and his church will die.”

The governor dispatches soldiers to track down the old man, who has the distinction of being one of the last churchmen who actually studied at the feet of one of the Lord’s apostles—the long-lived John. The soldiers care nothing about this. Intent on locating him, they torture witnesses, who reveal Polycarp’s whereabouts. His hiding place betrayed, Polycarp moves to another. One must face martyrdom boldly when it comes, he believes, but no one should seek it. The authorities discover where he is hiding, and soldiers arrive to arrest him. He welcomes them as if they are old friends and asks that they be served food and drink, requesting only an hour to pray before being marched to the arena. They agree. Overhearing his godly prayers, the soldiers wonder why they are arresting him. Surely this is a good man! They allow the hour to stretch into two.

Finally, they can delay no longer. They haul Polycarp in. When he nears the city, a heathen magistrate approaches in a chariot and takes Polycarp into it. The magistrate tries to persuade the Christian to sacrifice to the gods, but finding that he can make no headway with him, pushes him out of the conveyance so roughly that he falls and scrapes open the flesh on his shin. Showing as little pain as possible, the elderly bishop limps behind the soldiers into the amphitheatre where great numbers of people are gathered.

At sight of him, the mob sets up loud cries of rage and savage delight, but Polycarp hears a voice telling him, “Be strong and play the man!” Consequently, he does not allow the spite of the crowd to trouble him. The governor asks him to deny Christ and promises that if he will, his life will be spared. But the faithful bishop answers, “Fourscore and six years have I served him, and he has never done me injury; how then can I now blaspheme my King and savior?”

When Polycarp rejects further pressures to deny Jesus and save himself, the governor threatens to burn him. Polycarp turns the tables and warns him of eternal fire. The governor ignores the warning and orders the execution to proceed. The soldiers prepare to nail Polycarp to the stake, but he assures them nails won‘t be needed, so he is tied instead. The fire is lit, and the flames rise around him. But what is this? The fire parts around Polycarp! It is as if the flames avoid him; eyewitnesses will claim his body glowed like gold in the fire. Finally a soldier, whose usual task is to put wounded animals out of their misery, executes the bishop with a sword. The good old man is dead, an inspiration to others who will perish in similar circumstances for centuries to come.