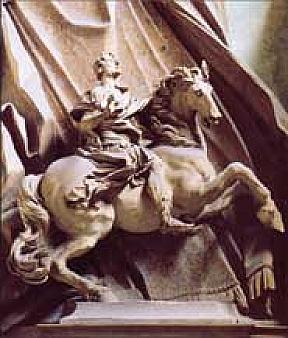 In AD 312, the Roman Empire is up for grabs. Its previous emperor, Diocletian, divided the realm between two senior and two junior emperors, but the complex arrangement has collapsed. The successors are at one another’s throats. Young general Constantine, son of Constantius, one of Diocletian’s co-emperors, has military successes under his belt, but now he faces a formidable veteran with a larger army and a better strategic position. What shall he do?

Constantine realizes that he needs help from a power greater than himself, but who or what? He has his doubts about the traditional Roman gods. He prays earnestly that the true God, whoever that may be, will “reveal to him who he is, and stretch forth his right hand to help him.”

He does not know it yet, but that prayer will change the course of Christian history as well as of western civilization. Later he will tell his friend Bishop Eusebius the incredible story of that hour. When Eusebius reports it in his history, he admits it is hard to believe.

What happens that is so hard to believe? Constantine suddenly sees a bright cross of light emblazoned against the noonday sky and upon it the inscription: “In hoc signo vinces” —“In this Sign Conquer.”

It brings Constantine the assurance he needs. He accepts this as the answer to his prayer and orders his soldiers to inscribe crosses on their shields. Encouraged by his vision in the heavens, he hurls his troops against his rival Maxentius at Rome’s Milvian Bridge. Surprisingly, Constantine is victorious. Maxentius is among those who drown in the Tiber.

Afterward Constantine does not forget to whom he owes his victory. For close to two hundred and fifty years, since AD 64 when Nero initiated violence against it, the Christian church has been a persecuted minority in Roman lands. Only a few years earlier, between 303 and 311, it suffered through Diocletian’s savage “Great Persecution.” Now Constantine issues orders that the Christian church is to be tolerated just as other religions are. Although he does not make Christianity the official religion of the empire, Constantine bestows favor on it, builds places of worship for Christians, and presides over the first general church council. He becomes the first emperor to embrace Christianity and will be baptized on his death bed—waiting so late for fear his duties as emperor might cause him to sin after he receives the solemn rite, blotting out its efficacy.

Writing Constantine’s biography, Eusebius will describe him as God’s gift to a suffering church. His Greek account will give the quote simply as “Conquer by this.”

For the first time in its short history, the church can worship and grow without constant fear of deadly persecution.