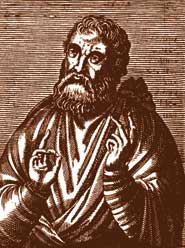 Justin Martyr from a 16th-century woodcut

You can’t hurt us

A young man is walking on a sandy beach near Ephesus in the year 132. Dressed as a Greek, he has an intelligent cast to his face, but there is something else in his expression—a restlessness, a longing. His name is Justin.

He is seeking God, but he has not found Him. For the time being, he has embraced the philosophy of Plato.

Another man, an old Christian, sees the philosopher on the beach and engages him in conversation. Justin listens courteously, for he admires these people of the cross because of their bravery under torture. The old man learns that Justin is a student of philosophy and a Platonist. He points out problems in Plato that Justin has never noticed before. For instance, according to Plato, bad men are punished by being reincarnated in lower animals. However, if you are turned into a toad and, as a toad, don‘t know you are being punished or why—what sense is that? The old man contrasts Plato with the Jewish prophets who foretold the coming of Christ. These arguments go straight to the void in Justin’s soul. A flame kindles in him, and on the spot he converts to the despised faith. He realizes that Christian teaching alone is safe and profitable for his soul.

Does his conversion mean that all his philosophical training must be abandoned? he wonders. He decides not. If it is subjected to higher truth, there is still a role for his pagan learning. The gospel can stand up to the best philosophy of the Greek world, he believes, and he must be the one to demonstrate this. Donning the white toga of a philosopher, he begins to lecture on Christian philosophy. Even more importantly (from the point of view of later theologians and historians), he addresses a written appeal on behalf of Christians in defense of Christianity to the most powerful man in the world, Marcus Aurelius, the Roman emperor.

This appeal is called an apology. In it he shows that Christians exceed the normal expectations of citizenship but will not compromise their faith. Though they pay taxes willingly and pray for the emperor, they will not pray to the emperor, nor allow anyone or anything to usurp Christ’s place. Tyranny and threats are powerless against Christian believers, he declares, because of the hope they have. “You can kill us, but you cannot hurt us.” His bold claim rests on his assurance that the death of the body is not the end of human existence. Resurrection is coming, and Justin boldly warns the emperor that he, like all other humans, will face the judge of all mankind.

Justin lives for over thirty years as a Christian philosopher until one day he is called to demonstrate the truth of his bold claim. Around the year 165, he is put on trial as a Christian and proves that his faith is not mere bravado. He stands firm on its truths and is beheaded, thereby becoming known as “Justin Martyr.”