“He can no longer have God for his Father, who has not the church for his mother.” Cyprian of Carthage (died 258), from On the Unity of the Church. 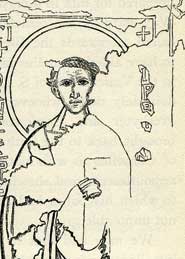 Cyprian from an old manuscript

On the Unity of the Church

The North African church is tearing itself apart and Cyprian, bishop of Carthage, groans to see it. Recently, imperial persecution caused many Christians either to recant their faith or to give up precious copies of Scripture to the authorities. However, other Christians stood fast under torture. Proud of their fortitude, these “super” Christians have rejected moderate Cyprian’s terms for restoring to fellowship those who lapsed and have also rejected the decision of a council of North African bishops which has ruled against them.

Now these men have gone further, declaring themselves to be the one true church and appointing their own bishops. History will remember them under such names as Donatists, Novatians, and Circumcellians. Cyprian considers their withdrawal a departure from the true, universal church, which was built on the apostles and Christ. Rival churches? To his thinking, this is impossible. There is but one God, one Spirit, one church.

But how can he prove his point? A lawyer by training, Cyprian gathers arguments to make his case, most of them based on Scripture. The result is “On the Unity of the Church,” one of the most famous essays in all of Christian history. He first presents its arguments to a gathering of his own church in the middle of AD 251.

Cyprian begins by showing that the most serious danger to the church comes not in times of persecution when people are on their guard, but during softer times when Satan attacks more subtly, through errors such as pride and laziness. To avoid error, says Cyprian, we must stand firm on the words of Christ. “How can a man say that he believes in Christ, who does not do what Christ commanded him to do?” Unity is essential because Christ commanded it. Although all of the apostles were equal, Christ established one of them as leader so that his church would have unity.

The church is a wife, he says, and is not adulterous. Building on that analogy, he adds, “Whoever is separated from the church and is joined to an adulteress [that is, to a false church], is separated from the promises of the Church; nor can he who forsakes the church of Christ attain to the rewards of Christ. He is a stranger; he is profane; he is an enemy. He can no longer have God for his Father, who has not the church for his mother. If anyone could escape who was outside the ark of Noah, then he also may escape who shall be outside of the church.”

Clearly Cyprian is thinking of the church as a visible body, rather than as a spiritual entity known only to God. Perhaps he does not see an inconsistency here, but it is to be noted that his favorite theologian is another North African, the great Tertullian, who himself belonged to a separatist church—the Montanists—which broke away from the catholic (universal) church.

Future centuries will see even more divisions in the church. Christians in the East and West will separate. Groups such as the Nestorians and Waldensians will emerge. In the sixteenth century, the Protestant Reformation will change western Christianity dramatically, bringing to birth still more new denominations. Rome will use Cyprian’s arguments against the break-away groups and any who refuse to accept Rome’s claims to supremacy. Among the latter will be churches in the Milanese area of Italy and in out-of-the-way places such as Ireland, which will hold themselves aloof from the Roman tradition for centuries.

Long after his death, Cyprian’s statement will still be acting as a touchstone to reveal one’s ecclesiastical views. Most Protestants will agree with Cyprian’s proposition in essence, but with the stipulation that the church is not a physical entity that can be seen, but rather a spiritual body, made up of all those whom the Lord knows, whatever their tradition of worship. The Roman Church, on the other hand, will invoke Cyprian’s authority and selected arguments from his writings to declare itself the one, universal, true church.