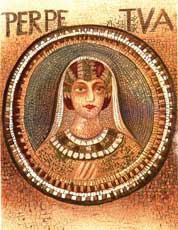 The prison was made to me a palace

The young mother, just twenty-two years old, is under sentence of death. Vibia Perpetua, whose sole crime is to be a Christian, is undaunted that tomorrow she must die in Roman games for the amusement of hostile spectators. No longer does she shrink from the vile conditions of her prison, which at first terrified her. On the contrary, she is eager to encourage fellow Christians to stand firm under brutal interrogation, just as she has stood firm.

Unlike most women in AD 200, she knows how to write, for her wealthy family has educated her. Now she takes up her pen, determined to leave a record of the grace which has sustained her throughout her suffering. She cannot know that future generations will point back to her as the first identifiable female Christian writer.

She tells how she responded to her father when he tried to turn her from her faith and how furious she made him when she said, “I can call myself nothing other than that which I am—a Christian.” A few days later she and her slave Felicity were arrested and taken to prison. “I was much afraid because I had never known such darkness. O bitter day! There was a great heat because of the press, there was cruel handling of the soldiers. Lastly I was tormented there by concern for my child.”

Perpetua writes that she worried for her son for several days until two deacons bribed the authorities to let her feed the baby, and then, “I was able to make arrangements so that the baby should stay with me in prison; and immediately I became well and was relieved of my labor and concern for the child; and suddenly the prison was made a palace for me, so that I would sooner be there than anywhere else.”

Continuing her account, she writes of her hope and of a vision she has had of heaven. She tells of her trial and her father’s pleas that she recant, of her sorrow when he is beaten in front of her because she will not renounce Christ. She also writes of her fear that her brother (who, like her, has been arrested for his faith) will not withstand his ordeal, and how she prays for him day and night. She records her joy—after spending a day in the stocks—to receive a dream in which she is assured he has entered heaven.

The prison warden, impressed with the grace of the Christian captives, allows fellow-believers to visit them, and, as unlikely as it seems, it is she and her fellow prisoners who comfort the free Christians, rather than the other way around. Her sorrow now is for her father, who pulls out his beard as a sign of grief, moaning at the disgrace his daughter has brought upon him.

Lastly, she recounts her final vision in which she becomes a man and faces a mighty Egyptian in the arena, and defeats him. “And I awoke; and I understood that I should fight, not with beasts but against the devil; but I knew that mine was the victory.”

Time has run out. She can write no more and closes with her final words: “I have written to this point, which is the day before the games; but the outcome of the games themselves, let whoever wants write it.”

The next day, she goes courageously to her death. A friend will complete her manuscript. He describes how, after a mad heifer tosses her, she pins up her hair so she won‘t appear to be grieving. Even in her agony she is modest, covering herself where her dress has gone awry, and she proves steadfast as she guides the death sword to her own throat when a young soldier trembles too violently to dispatch her cleanly.