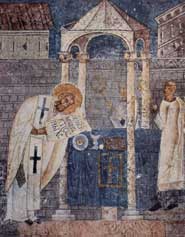 Fresco of Basil the Great in the Cathedral of Ohrid

What will you answer to the judge?

In the fourth century, Basil is a champion of orthodox Christianity, a fervent defender of the Nicean creed, which he upholds despite the threats of pagans and Arians. Twice he has challenged powerful emperors who demanded he adapt Christianity to their whims. Both times he has been in danger of violence or death. He has scorned these threats.

Offspring of a godly family, well-educated and well-traveled, Basil is a master of men and of literature. He assigns bishops and directs monks; he writes books, sermons (homilies), and letters. Hundreds of his short works will survive for centuries.

He has turned his great abilities to the organization of a useful kind of monasticism, which places less emphasis on asceticism than on practical charity. He has opened the first hospitals in the Christian world as well as hostels for Christian travelers and for people who need a night’s shelter. As one who sees the whole person, his thought encompasses both the abstract and the concrete: not only does he defend dogma, he encourages the use of art, and he ladles soup for the hungry.

His homilies address his deepest concerns. In one he will insist that Christian young people should be allowed to read pagan literature, browsing like a honeybee for nectar and discarding everything worthless. In other homilies he challenges the rich to help the poor.

Homily VII is one of those that deals with the use of money. Great wealth has accumulated in the eastern empire and in Caesarea, an administrative center of Cappadocia, and many churchgoers loll about in riches. Basil feels that their emphasis is on the wrong treasure. He challenges the superfluities of the rich—the horses for which they maintain pedigrees, their richly outfitted mules, their vast lands and herds, their hordes of household servants, their cooks and confectioners, their entertainers, their mosaics and gilded ceilings. Basil deems all of this frivolous from a Christian point of view.

In Homily VII he urges the rich to remember God, the omniscient watcher who judges their neglect of their fellow men: “You who dress your walls, and let your fellow-creatures go bare, what will you answer to the judge? You who harness your horses with splendor, and despise your brother if he is ill-dressed; who let your wheat rot, and will not feed the hungry; who hide your gold, and despise the distressed?” In short, he satirizes the fancies of the wealthy and warns them of their eternal peril. In doing so, he attempts to point people to what matters for eternity.