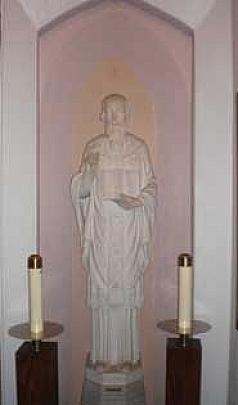 He was made man

The Egyptian deacon is barely into his twenties but already shows the genius of a mature mind. Athanasius, assistant to Bishop Alexander of Alexandria, is the latest theologian to emerge from North Africa, which, for over a century, has been noted for its theological education and innovation. Conscious of his gifts, he writes a book designed to refute heathen arguments and to establish the reasonableness of Christianity. In so doing, he is both imitating his predecessors and setting a new standard for Christian argumentation.

The first part of his book shows the failure of worldly philosophies and religions; in the second part, he shows the triumph of Christ.

The key question with which he grapples is, “Why did Christ become a man?” His answer takes in the fact that humans had lost sight of God and were wasting away. Therefore, God had to deal with their departure from him. Through the incarnation, God revealed in human form his invisible godhead. He was providing a remedy from the effects of mankind’s fall into sin and overcoming death through the death of one who could not by his nature remain dead. As Athanasius sees it, the beauty of Christ’s life, the spectacle of his death, and the power of his resurrection form an irresistible revelation of God, by which believers are changed and society transformed.

A person looking at Christ’s works can see that they are God’s, says Athanasius. If it is not so, scoff; but if it is so, recognize that in Christ God has been made known. And why? In his answer, the young deacon shows he has contemplated several profound promises of Scripture: Christ’s assertion that Christians will be one with the Father as he is one with him, Paul’s claim that God will become all and all to them, and Peter’s assurance that they may participate in the divine nature.

Christ became a man not merely to deal with the human mess but, in his grace, to create a glorious new potential for mankind. It is this idea that triumphantly caps Athanasius’s argument: “For he was made man that we might be made God; and he showed himself in the body that we might receive the idea of the unseen Father; and he endured the insolence of men that we might inherit immortality.”

Being “made god” or deification is an idea widely accepted in Athanasius’s era. It is mentioned by Irenaeus of Lyons, Clement of Alexandria, Basil the Great, and other church fathers whose orthodoxy is unquestioned. In another of his books, De decretis, Athanasius will explain that while we do not actually become God in our nature or substance, by his Spirit we become “men in Christ.” Another great theologian will weigh in with an explanation half a century later. Augustine of Hippo will write, “If we have been made sons of God, we have been made gods; but this is by grace of adoption and not of the nature of our begetter.”

Athanasius’s many insights into the nature and meaning of Christ will make him the obvious champion of the orthodox view of Christ in the face of Arianism, which is just beginning to raise a challenge to the church in his day, denying the full divinity of Christ. In a few years, Athanasius will become Bishop of Alexandria and suffer repeated exiles and persecution for defending the divinity of Christ, the eternal Son of God, who became a man.