“My soul magnifies the Lord and my spirit rejoices in God my savior.” Mary, the Mother of Jesus (flourished first century). Quoted in the Gospel of Luke. 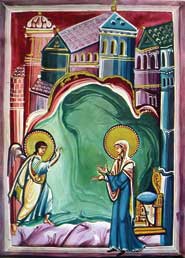 The Annunciation by Meister des Sakramentars

My soul magnifies the Lord

For several days, a Jewish peasant girl named Mary has pondered a disturbing announcement made to her by a frightening apparition. She had been going about her duties when suddenly all routine was obliterated. Before her stood a man-like being of terrifying holiness. An angel! No wonder people trembled in the presence of these powerful beings.

“Greetings,” he said. “Greetings, you who are highly favored! The Lord is with you!”

Mary’s first thought had been, “What kind of greeting is this?” But before she had time to consider the question, the angel had spoken again. He had seemed not only to know exactly what she was thinking, but her name, too. “Don‘t be afraid, Mary,” he had said.

He had announced that she was going to bear a son—a son to be named Jesus, who would sit on David’s throne and reign forever.

How could that be? A virgin, she had never lain with a man, and she had quickly apprised the angel of this fact. His reply had been that this child would be different—the fruit of the Holy Spirit. Lest this seem too difficult to her, he had added that her elderly and barren cousin Elizabeth had conceived in her old age and was now six months pregnant.

“I am the Lord’s servant,” Mary had answered. The angel left. Immediately after his departure, Mary had packed a few things in preparation for visiting Elizabeth.

As she makes her way to her cousin’s home, she is still astonished. Barren Elizabeth pregnant? And her husband Zechariah so old, too ... Why, this is like something out of the Scripture! It reminds her of the ancient stories of Sarah and Hannah, both pregnant supernaturally after years of being unable to conceive.

Mary is familiar with such stories, the currency of her people. She is well-educated for a peasant girl, knowing large tracts of Scripture by heart. Now, as she heads for Elizabeth’s place, she senses the Holy Spirit stirring within her. She knows herself to be with child. What is more, her thoughts are taking a new turn. The appearance of the angel has been a powerful catalyst to her mind and emotions. With the Holy Spirit directing her thoughts, Bible verses, Messianic prophecies, and historical events jostle in her memory. She sees herself embedded in the amazing tradition of her people and within the royal line of David. During the long hours walking and riding southward toward her cousin’s home in the hill country of Judea, she meditates on the angel’s declaration. Her thoughts begin to congeal into phrases—phrases which she commits to memory as people do in societies which rely heavily on oral tradition.

Finally Elizabeth’s home appears in the distance. Two women of destiny are about to meet. There is a timeless quality to the encounter.

Elizabeth’s voice is almost a shout in response, “Blessed are you among women, and blessed is the child you will bear! But why am I so favored, that the mother of my Lord should come to me? As soon as the sound of your greeting reached my ears, the baby in my womb leaped for joy. Blessed is she who has believed that what the Lord has said to her will be accomplished!”

Mary can no longer contain the joy and wonder that have been building in her for days. She breaks into song: “My soul magnifies the Lord, and my spirit rejoices in God my savior, for he has looked on the humble estate of his servant. For behold, from now on all generations will call me blessed; for he who is mighty has done great things for me, and holy is his name.”

Future generations will know her poem as “The Magnificat.” It will often be performed in choral arrangements. Johann Sebastian Bach, Michael Praetorius, John Rutter, and Antonio Vivaldi are but a few of the eminent composers who will set its sublime words to sublime music.