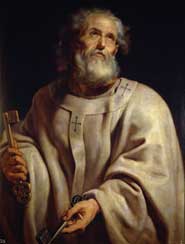 You Are the Christ

Usually the better we get to know someone, the less perfect we find them. The opposite was true for those who walked with Jesus in the first century. Put yourself in Peter’s place.

Peter has lived with Jesus for months. He’s seen him tired, hungry, and thirsty; he’s seen him angry; he’s heard him ask questions to gather facts the way any other person does. In other words, Peter has seen Jesus as fully human. In spite of these facts, Peter declares, “You are the Christ, the Son of the Living God!” —a statement which is shocking to first-century Jewish ears.

Twenty centuries later, western readers may not feel the impact of those words as Peter’s Jewish contemporaries did. The success of Christianity will have made it commonplace to think of sons and daughters of God.

First-century cultures outside Israel might not feel the impact either. In Greek culture, a son of a god is likely to be a thug and lecher like Hercules, behaving no nobler than the worst idols in his diabolical pantheon. In far eastern cultures, almost anything useful or interesting can be treated as an object of worship. But coming out of a Jewish culture that has rejected idolatry, Peter’s words are extraordinary.

Peter’s Jewish contemporaries think of God as high above all highness, pure above all human purity. To be a son of God is to have the character of God. For Peter to say this is to say, “I see in you, Jesus, a moral and spiritual character that puts you on an equal footing with God—a partaker of his nature.” This is either an astute observation or a terrible blasphemy.

Christ’s immediate reaction, however, is to praise Simon Peter: “Blessed are you, Simon son of John, for flesh and blood has not revealed this to you, but my Father who is in heaven.” Peter has recognized a radical truth about Christ’s person that millions of Christians have endorsed ever since.

A short time after Peter’s earth-shaking declaration, the Pharisees scheme to have Jesus executed. One reason they give for their action parallels Peter’s great confession. According to the Pharisees, Jesus deserves to die because, “You, being a man, make yourself equal to God.”