“For God so loved the world that he gave his only begotten Son.” John the Evangelist (flourished first century), in his Gospel. 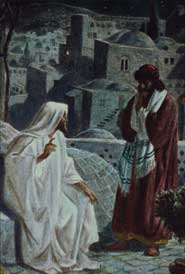 Jesus and Nicodemus by William Hole

For God So Loved the World

About thirty-five years have passed since Jesus died in agony on a cross, then astonished his followers by rising from the dead and ascending into heaven before their eyes. His close disciple John is writing a memoir of the master whom he knew and loved. This is important because the gospel has radiated outward from Jerusalem to people in distant lands—to people who need to know the facts about Christ. Unless John writes down his memories, they will be lost.

John’s “inside account” of Jesus and his entourage will appear to future ages to be quite independent of the gospels which preceded it because few of the events that appear in his account appeared in theirs. He writes in simple Greek, the Greek of everyday citizens throughout the Roman Empire. Nonetheless, with his limited vocabulary, he expresses some of the most profound thoughts of the Bible. Clearly, he has reflected deeply on the words and incidents of Jesus’s life.

One of his recollections describes the night visit of a leader of the Jews—Nicodemus, a member of the strict, legalistic Pharisees. In their longing for salvation, Pharisees attempt to obey every law as interpreted and extended by their scribes. The six hundred or so commands of the Old Testament have grown to thousands. Keeping them all is impossible. Does Nicodemus feel this? Does he see a freedom in Christ’s perfection which suggests a better way? Whatever his motive, he comes to Jesus one night.

Jesus immediately confronts him with an essential fact of Christianity—one that several other New Testament authors also emphasize: the Christian life requires a radical renewal from within, a re-creation, a new birth. “I tell you the truth, unless one is born again, he cannot see the kingdom of God,” declares Jesus. And what is this kingdom? It is obeying God totally from the heart—the very thing Nicodemus desires, as shown by him becoming one of his nation’s few, elite Pharisees. While Nicodemus wrestles with the means by which this radical transformation can come about, Jesus shows him it must be by the Holy Spirit. Nicodemus asks how the Holy Spirit can do such a thing, but Jesus retorts with a question of his own: how can Nicodemus, a religious leader in Israel, not understand something so basic? After all, this new birth takes place on earth—not in heaven.

To Jesus, Nicodemus’s question is driven by deliberate unbelief, and he challenges him and like-minded non-believers on the issue: “We speak of what we know, and bear witness to what we have seen, but you do not receive our testimony. If I have told you earthly things and you do not believe, how can you believe if I tell you heavenly things?” Jesus claims to speak about salvation and the Spirit from first-hand knowledge as the heavenly man.

John explains why Christ, the heavenly man, appeared on earth. In Moses’s time, God punished an Israelite rebellion by sending a plague of serpents. When the rebels cried out for relief, God had Moses cast a bronze image of a snake and attach it to a pole. Anyone in the camp, who was bitten by the snakes, needed only turn and look at the snake on the pole to be healed.

In the same way, Jesus had to be lifted up (crucified) on a pole for all men to see. Just as the bronze serpent on its pole brought life, the Son of God on his pole brings eternal life. Why? Because God the Father sent him, the Son, to rescue men: “For God so loved the world that he gave his only begotten Son, that whoever believes in him should not perish but have everlasting life. For God did not send his son into the world to condemn the world, but that the world might be saved through him.”

Future generations will read this as the key text of the entire New Testament, a summary of the gospel. Many theological theories will attempt to explain how Christ’s death avails for our salvation. Ultimately, the explanation is less important than the underlying truth: Christ did not come to condemn us, but to save us. He is the key to salvation.