“I am the wheat of God and am ground by the teeth of the wild beasts, that I may be found the pure bread of Christ.” Ignatius of Antioch (died <em>ca.</em> 107), in his letter to the Romans. 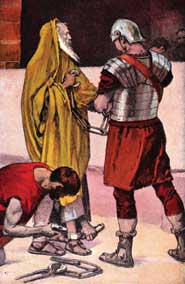 I am the wheat of God

Ignatius is a Christian bishop from Antioch in Asia Minor. To be a bishop is a dangerous job because when persecutions come, they fall first on church leaders. His position in the church is all the reason needed for his arrest. Chained between Roman soldiers, he is hustled fifteen hundred miles along a land and sea route to Rome, where he is to be thrown to lions.

Fellow Christians hear of his plight, and congregations meet him along the way with prayers and offers of support. Churches that are farther away send messengers. Grateful for their concern, Ignatius writes them thank you letters while still on his journey to Rome. These letters will tell future generations much about the early church. As one of the last bishops alive who has met the apostles in person, Ignatius feels an obligation to preserve the church which was founded on their labors and on the blood of Christ. In his messages to the distant churches, he speaks much of unity and of supporting and obeying bishops. Writing to Smyrna, a city near his home, he becomes more personal, and his words explain his cheerful attitude toward his pending martyrdom. Nearness to the sword, he tells them, is nearness to God; to be among the wild beasts is to be in the arms of God; only let it be in the name of Jesus Christ. “I endure all things that I may suffer together with him, since he who became perfect man strengthens me.”

In his letter to Rome, the city which looms ahead of him as the place where he is to die, Ignatius urges believers not to interfere with his sentence or seek his release. If they show love to his body and he escapes his sentence, he will have to run his race again, he tells them. It is bad enough having to gear up for such a test once, let alone a second time. Rather, the joy he expects after this ordeal will make it all worth while. It inspires him to write, “Allow me to become food for the wild beasts, through whose means it will be granted me to reach God. I am the wheat of God, and am ground by the teeth of the wild beasts, that I may be found the pure bread of Christ.”

Chained between his guards, he continues his journey. When the weary travelers finally arrive in the cruel city, which is mistress of the Mediterranean world, the games are about to close for the night. He is hustled into the arena, where savage beasts are immediately released on him and he meets his death bravely.

Future generations will marvel not only at his fortitude and love for Christ, but at the modesty with which he assessed himself. To the Christians at Ephesus he had written, “I am only beginning to be a disciple, so I address you as my fellow students.”