“If I have all faith, so as to remove mountains, but have not love, I am nothing.” The Apostle Paul (died <em>ca.</em> 67), in his first letter to the Corinthians. 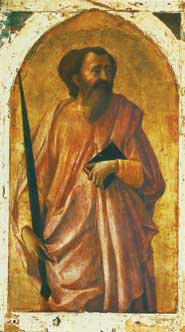 If I have all faith

Of all the churches which he has founded, the Corinthian church gives the apostle Paul the most pain. They are a proud and quarrelsome lot, these Corinthians, given to forming cliques and jockeying for position among themselves. Some even try to claw their way to the top of the social heap by showing off spectacular gifts they have received from the Holy Spirit. Among these are gifts of wisdom and knowledge, healing, uttering God’s truths, and speaking in ecstatic tongues.

Paul, having spent eighteen months establishing the Corinthian church, has now moved on to Ephesus. However, the problems of the quarrelsome Greek church have followed him, coming to his attention through some of its members who visit him. Paul is too engaged at Ephesus to rush back to Corinth to deal with the difficulties himself, so he writes a lengthy letter addressing the issues.

Later generations will include this letter in the Bible and name it The First Epistle to the Corinthians. When Paul comes to the misunderstood issue of spiritual gifts, he explains that they are given for unifying and building up the whole church, which he compares to a body. A body, he says, has many parts, each with different strengths and different functions. For it to work, all of its parts need to act together. Different gifts are given by one Spirit for the common good of the whole. One Christian will have one gift, another a different one, but each is essential to the body. Just because a given Christian doesn‘t have a spectacular gift does not make him or her inferior. The real test of superiority is completely different. That is what Paul now sets forth.

Eloquent or mysterious words without a loving heart behind them are empty. Showy gifts and dramatic acts of faith are worthless without the humble virtue of love. Even the zeal that sacrifices one’s own body loses meaning without love. Love is what Paul prescribes to his troubled congregation. His words will be among the most quoted of the New Testament.