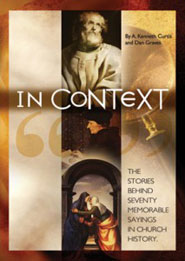 What the book In Context sets out to do and the principles by which the featured quotations were selected.

Sometimes a speaker or author drops a phrase which is like one of those prickly burrs that accumulate on a walker’s socks in a wild field. Just as the prickly seed case clings like super velcro to the clothing, so the idea sticks in your mind and won’t let go. That is how it was for me when I first heard William Carey’s admonition, “Expect great things from God, attempt great things for God,” or Katie Luther’s dying words, “I will stick to Christ as a burr to a coat.” These are sayings to be remembered.

Christian history is full of such words, except that, unlike burrs, we no more want to get them out of the mind than we want to get the color out of a Michelangelo painting. This book has several such “velcro” sayings. It also has many sayings which, while not as memorable as the two quoted in the first paragraph, are worth contemplating because they distill the essence of a historical period, an individual, or a movement.

These posts attempt to tell Christian history through the stories behind seventy stellar sayings. Together the quotes cover the first twenty centuries after Christ’s birth and many of the key events in the spread of the Christian faith. The “big names” of church history are here, and many lesser names who said memorable things. Both men and women are represented.

Readers may wonder why many quotes—better known even—were left out, and why some of those included are not the most famous sayings attributed to their subjects. The first reason for our selection is that we wanted quotes that we could place in context. Some famous sayings were left out, therefore, because we could not place our hands on trustworthy documentation which fixed them in a specific context. We wanted to know when, where, and why the words were spoken. Our intent was to confirm the authorship of each quote and its original context to eliminate conjecture as much possible.

Secondly, we wanted quotes we could authenticate. Many words put into the mouths of the famous were, as far as we can determine, never said. These get repeated as truth until they are believed. For example, Calvin is reputed to have said in his Institutes, “God preordained, for his own glory and the display of His attributes of mercy and justice, a part of the human race, without any merit of their own, to eternal salvation, and another part, in just punishment of their sin, to eternal damnation.” We searched the text of the Institutes but could not turn up any such saying, which seems to be a synopsis of the Canons of Dort.

Christian traditions differ greatly. We want to be upfront and tell you we write from a Protestant viewpoint. All the same, we have tried to keep our bias to a minimum and maintain a spirit of fairness.

We hope you will enjoy this tour through Christian history by way of some of its best-known sayings.

Article #1: My soul magnifies the Lord

Mary, the Mother of Jesus (flourished first century). Quoted in the Gospel of Luke.