“What the soul is in the body, that are Christians in the world.” Unknown author (second century)in the Letter to Diognetus. 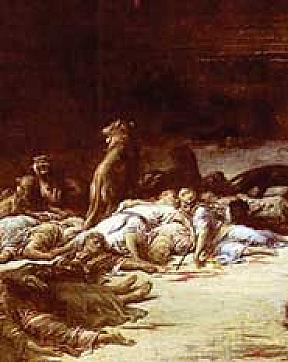 The Martyrs by Dore

Christians in the world

It is early in the second century. Christ’s resurrection is about a hundred years past, and during the intervening century, the church he founded has gained numerous adherents throughout the world. In spite of their innocent lives, Christians are misunderstood, maligned, persecuted, and martyred. The main accusation against them is that they are atheists because they do not worship the idols of the empire.

Nonetheless, their stark faith still holds an appeal, not least because of the Christians' generous character, their willingness to suffer for what they believe, and the joy they demonstrate even in the midst of that suffering. Such qualities draw more than a few noble-minded individuals to weigh the evidence for Christianity. One such person is Diognetus. Intrigued by the phenomenon of Christianity, he has written to a Christian philosopher for answers. This philosopher, whom tradition names Mathetes, replies in Greek, the language of philosophy. His reply is a carefully crafted letter of ten short chapters. (Two others will be added by another hand.) Among the charges he answers is that of atheism: Christians worship a living but invisible God, not handmade objects of stone and wood, he asserts. He also explains why Christians do not imitate the worship of the Jews: it has become fussy, superstitious, and obsolete, he charges.

Mathetes then describes to Diognetus in glowing terms the way Christians live: “Their existence is on earth, but their citizenship is in heaven. They obey the established laws, and they surpass the laws in their own lives. They love all men, and they are persecuted by all.” Scattered throughout the world, Christians by love and self-discipline are transforming sin-steeped societies, acting like a conscience to bring new life to human institutions. At this point he makes his most audacious statement: “In a word, what the soul is in the body, that are Christians in the world.” He proceeds to show nine similarities between Christians and the soul, including, “The soul though itself immortal lives in a mortal tent; so Christians sojourn amid perishable things, while they look for the imperishability which is in the heavens.”

As the writer moves toward his conclusion, he addresses Diognetus’s objection that Christianity is a latecomer on the religious scene. He theorizes that God delayed its revelation because he wished to make men conscious of their weakness and corruption before sending them the Redeemer.

The writer ends by describing the love of God and urging that Diognetus respond to it. He argues that power over others is not true superiority; instead, true superiority is found in helping others. Finally, he warns Diognetus that whereas Christians can die without terror because they have a glorious future, Diognetus cannot. When Diognetus glimpses hell, he will appreciate the attitude of the righteous who suffer a little while on earth in order to escape eternal punishment.