“They who belong to Christ destroy the property of Christ more than enemies.” John Chrysostom (<em>ca.</em> 345–407), from On the Priesthood. 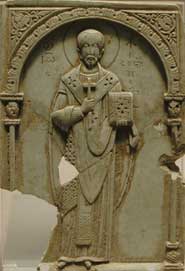 John Chrysostom, from a soapstone relief at the Louvre

Destroy the property of Christ

By tricking a close friend named Basil, John, a young monk of Antioch in Syria, temporarily escapes induction into the Christian priesthood. Afterward he gleefully justifies his fraud to Basil, who also had been reluctant to accept ordination. Indeed, John does more; he writes a book on the priesthood, which serves both as a defense of his deceit and as a lofty idealization of what the priesthood should be.

John lays out the requirements of the office and claims he lacks them. “A priest ought to be sober minded, and penetrating in discernment, and possessed of innumerable eyes in every direction, as one who lives not for himself alone but for so great a multitude. But that I am sluggish and slack, and scarcely able to bring about my own salvation, even you yourself would admit, who out of love to me are especially eager to conceal my faults,” he writes to Basil.

He notes that a priest must not be wrathful but able to endure insults. By contrast, he feels that he has a wild beast within himself and that the condition of priesthood would cause him to lose the tranquility that monastic seclusion has permitted him to gain.

The worldliness of the church, which bestows its honors for all the wrong reasons, also worries him. To the church of his day, wealth, seniority, and human distinctions too often count for more than moral excellence.

“They take commonplace men off-hand, and set them to preside over those things, for the sake of which the only begotten Son of God did not refuse to empty himself of his glory and become man, and take the form of a servant, and be spat upon, and buffeted, and die a death of reproach in the flesh. Nor do they stop even here, but add to these offences others still more monstrous; for not only do they elect unworthy men, but actually expel those who are well qualified ....

“Now do not such deeds deserve to be punished by ten thousand thunder-bolts and a hell-fire hotter than that with which we are threatened? Yet these monstrous evils are borne with by him who wills not the death of a sinner, that he may be converted and live. And how can one sufficiently marvel at his loving kindness, and be amazed at his mercy? They who belong to Christ destroy the property of Christ more than enemies and enemies, yet the good Lord still deals gently with them, and calls them to repentance. Glory be to you, O Lord! Glory to you!”

For all his clever rhetoric, John is unable to elude priestly office much longer. Whether he wishes it or not, the believers of Antioch recognize his potential and compel him to accept ordination. Time will prove they made a good choice. He will became a noble bishop, a great orator, and a man of fearless truth, known after his death as “golden-mouth.” Equally against his will, he will also be forced to accept the office of Patriarch of Constantinople. There, for his fearless critiques of the empress Eudoxia and other high-placed individuals, he will suffer the very offense that he described as worthy of the hottest hell-fire: he will be expelled from his office and sent into a harsh exile in which he will die.