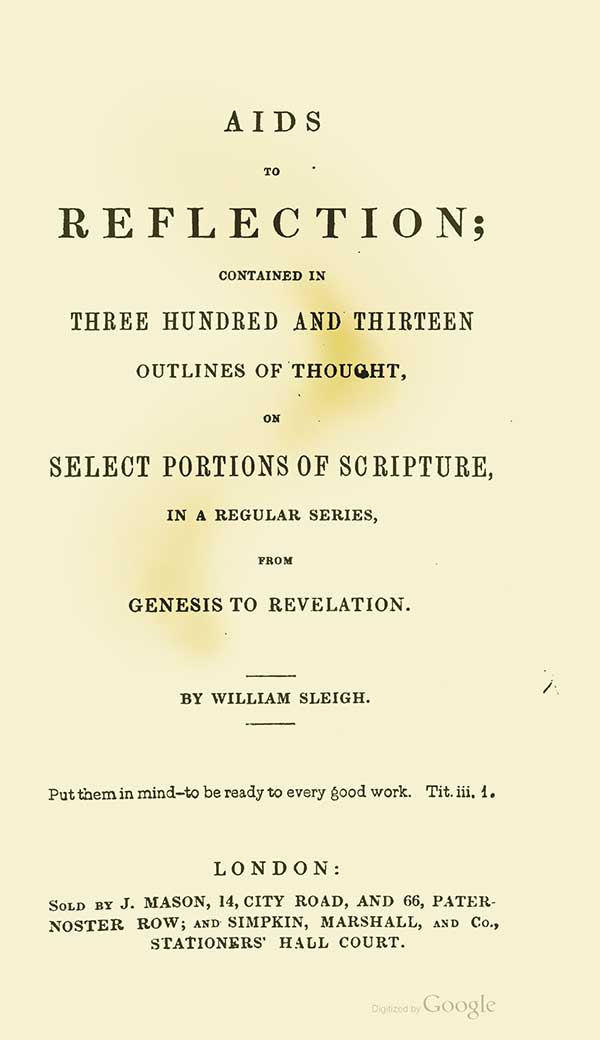 Title page of Aids to Reflection

For I say to you that unless your righteousness surpasses that of the scribes and Pharisees, you will not enter the kingdom of heaven —Matthew 5:20 (NASB).

We may notice from hence, what there was in their righteousness that was good.

Their righteousness was that righteousness which consisted in acts; that which was seen. And certainly we must allow, that viewed even in this light, there was much in it that might be considered as good. They fulfilled the duties of mortification and self-denial.

They were scrupulously exact in paying tithes. They displayed a peculiar jealousy respecting the sacred rest of the Sabbath. They prayed much and long. They observed the purifications of the law with great punctuality. And they abounded in almsgiving…. This was a good, such as it was, marking their character; but as it left them short of eternal life, however much they relied on it for salvation, it will be proper to show wherein it was defective in respect to the end proposed.

In its nature. They cleansed the outside of the cup and platter, while within they were full of abominable lusts, Matthew 23:25, Luke 11:39.

In its origin. The traditions of the elders, and their own laws, were the rules by which they regulated their conduct: not the word and will of God, Matthew 15:2,3; Mark 7:9.

In its measure. They held that some precepts were to be kept, but that they were at liberty to neglect others: and thus while paying tithe of mint, and anise, and cummin, they had no regard to the weightier matters of the law, judgment, mercy, and faith, Matthew 23:23.

In its principle. In their actions they were actuated entirely by some selfish, carnal motive, without any regard to the divine honor.

From the whole view of the subject, we cannot but remark, how absolutely necessary it is that we have a better righteousness than the Scribes and Pharisees had, how unhappy is the case of such as even come short of this righteousness, and how highly we should value the gospel of Christ, which reveals a righteousness of the right description.

William Sleigh. Aids to Reflection Contained in Three Hundred and Thirteen Outlines of Thought on Select Portions of Scripture in a Regular Series from Genesis to Revelation. London, 1843.