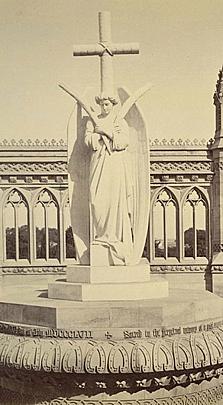 William Edwards was a magistrate and tax collector for the British in Rohilcund, India. He warned his superiors that their oppressive behavior, depriving the former ruling class of their properties, was fomenting anger. His warnings were dismissed as alarmist. Recognizing the coming danger, Edwards sent his family to safety and they escaped the massacre of Europeans that followed during the India Mutiny of 1857. A Christian, Edwards remained at his post, saying, “I went into my room and prayed earnestly that God would protect and guide me, and enable me to do my duty.” With a few reliable helpers, he sought to maintain peace in his district. This proved impossible as treasury guards and town policemen joined the mutineers on 1 June. Edwards was able to escape because the first concern of the mutineers was to ransack the treasury. A friendly sheik shielded him. On June 27th, still in hiding, he commenced a diary. His entry for this day, 5 August 1857, is interesting as a statement of his faith. After many harrowing adventures, he managed to escape with three other English people by boat to Crawnpore.

“Last evening, for the first time since our first arrival at Kussowrah, we have been allowed to go out to take a walk; as the waters completely surround the village, and there is no danger of any spies or strangers arriving and seeing us. The change was most refreshing, from our miserable little pent-up quarters to the open country. Everything looked peaceful; the people were at their usual occupations; there were no external signs that war and rebellion were raging all around us, and that we ourselves were as ‘the hunted partridge on the mountains,’ with but a step between us and death, and that in a fearful form....”

“How true do I now find the remark I remember once reading of Arnold’s, that ‘the Psalms have been a storehouse of never-failing comforts to believers in every age.’ Since our return from Runjpoorah, Mrs. Probyn has received a box of her things, which had been in Hurdeo Buksh’s keeping at Dhurumpore. Among the contents was her Bible; and, oh! what a comfort has it been to us since, as we are thereby enabled to read the Psalms. There is not a day on which we do not find something that appears as if written especially for persons in our unhappy circumstances, to meet the feelings and wants of the day. This morning, for instance, I derived unspeakable comfort from the 15th and 20th verses of the 25th Psalm, and in the evening from verses 5, 6, 7, 12, 13, 14 of the 27th Psalm.”