A Hymn for the Transfiguration - 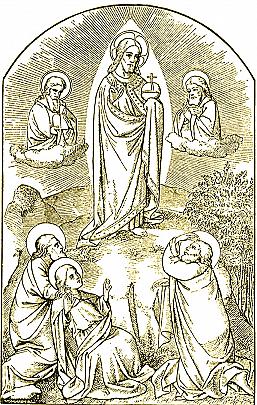 The feast of Transfiguration is one of twelve great feasts observed by the Eastern Orthodox Church and is also observed by the Orthodox churches, the Roman Catholic, Old Catholic, and Anglican churches. Its date is today, 6 August (the same date in the East as in the West, but because of differences between the Julian calendar and the Gregorian, it is observed almost two weeks later in some Eastern churches). It commemorates the glorious transformation of Christ before the eyes of Peter, James, and John. Moses and Elijah appeared beside Jesus in radiant garb and God overshadowed the mount, declaring that Christ was his beloved son. Today’s quote is the translation of a hymn sung at this feast in some Orthodox Churches.

“When on the mount the Lord appeared
Transfigured to the sight,
His countenance was like the sun,
His raiment glistened white.

But dull the minds, and dark the eyes,
On whom such glory shone;
They saw not God upon the mount,
They saw but man alone.

And when the dark and cloudy days
Of death and sorrow came,
What were their thoughts of Him who hung
Upon the cross of shame?

They knew not that the God of Life
An offering yielded there,
And of His will endured for all
The load of sin He bare.

Lord, to the mount where Thou art seen
In all Thy glory bright,
Thy servants now would wend their way
To gaze upon the Light,

And there behold, in glory clad,
The Light to mortals given,
That in the night that hid the cross,
Shone with the light of heaven.”

Hymns from the Morningland: Being Translations, Centos and Suggestions from the Service Books of the Holy Eastern Church, trans. John Brownlie.