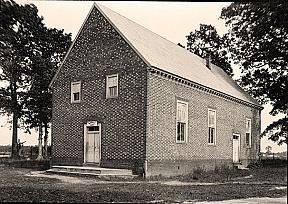 On this day, Saturday, August 13, 1785, Baptists met at Dupuy’s meeting house, in Powhatan County, Virginia. Near the end of their meeting, they learned that Virginia’s assembly had advanced a law for a general assessment (tax) that would support the established (Anglican) church of Virginia. The Baptists prepared a resolution against this bill.

“Resolved, That it be recommended to those counties, which have not yet prepared petitions, to be presented to the general assembly, against the engrossed bill for a general assessment for the support of the teachers of the Christian religion, to proceed thereon, as soon as possible: That it is believed to be repugnant to the spirit of the gospel, for the legislature thus to proceed in matters of religion: that no human laws ought to be established for this purpose; but that every person ought to be left entirely free, in respect to matters of religion: that the holy author of our religion, needs no such compulsive measurer for the promotion of his cause: that the gospel wants not the feeble arm of man for its support: that it has made, and will again through divine power, make its way against all opposition: and that, should the legislature assume the right of taxing the people for the support of the gospel, it will be destructive to religious liberty.

Therefore, This committee agrees unanimously, that it will be expedient to appoint a delegate to wait on the general assembly, with a remonstrance and petition against such assessment.”

Semple, Robert Baylor. History of the Rise and Progress of the Baptists in Virginia. 1810.