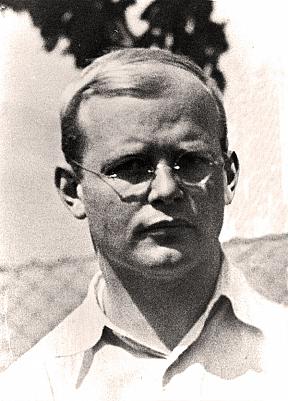 On this day, 21 July, 1944, Deitrich Bonhoeffer learned from a radio broadcast that a plot to kill Hitler had failed. Although he was already in prison, the Lutheran pastor knew he would be implicated because he had earlier worked with the plotters to bring about the assassination. In light of the fate that he knew loomed before him, he wrote a letter to his friend Eberhard Bethge, ruminating on his understanding of the Christian life.

“I remember a conversation that I had in America thirteen years ago with a young French pastor. We were asking ourselves quite simply what we wanted to do with our lives. He said he would like to become a saint (and I think it’s quite likely that he did become one). At the time I was very impressed, but I disagreed with him, and said, in effect, that I should like to learn to have faith….

“I discovered later, and I’m still discovering right up to this moment, that it is only by living completely in this world that one learns to have faith . . . . By this-worldliness I mean living unreservedly in life’s duties, problems, successes and failures, experiences and perplexities. In doing so we throw ourselves completely into the arms of God, taking seriously, not our own sufferings, but those of God in the world—watching with Christ in Gethsemane. That, I think, is faith; that is metanoia; and that is how one becomes a man and a Christian (cf. Jer 45!). How can success make us arrogant, or failure lead us astray, when we share in God’s sufferings through a life of this kind?

“…So I’m grateful for the past and present, and content with them…”