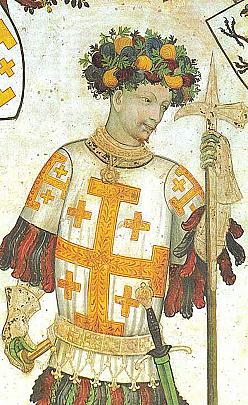 The first Crusade ended in the capture of Jerusalem on 15 July, 1099, A week later, on this day 22 July, 1099, the crusaders chose Godfrey de Bouillon as ruler of Jerusalem. Godfrey accepted the authority, but refused to put a crown upon his head. According to William of Tyre, writing in the following century, Godfrey said:

“I will not wear a crown of gold in the city where Our Lord Jesus Christ wore a crown of thorns.”