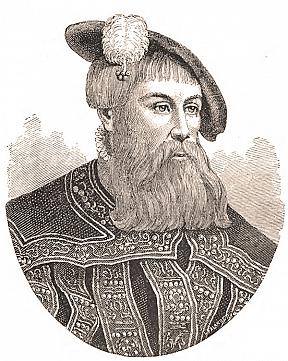 Gustav Vasa was the son of a senator, Erik Johansson. Because Erik had voted to depose corrupt Archbishop Trolle, he was one of about eighty nobles massacred in the Stockholm Bloodbath when King Christian II of Denmark invaded Sweden and restored Trolle to power. Learning that a price had been placed on his head, Vasa led a revolt and eventually became king of Sweden. The nation was crippled for lack of a trained civil service and its finances were a mess. Vasa saw only one way to fund the government: seize the huge fortunes Swedish bishops and archbishops had amassed. Speaking to the Swedish Diet (Parliament) at a meeting that opened in Västerås on this day, 24 June, 1527, (Midsummer Day) he said,

“Our unbearable political and economic situation is the fault of the bishops and their huge wealth.”

Date from: The History of Gustavus Vasa, King of Sweden. Extracts from His Correspondence. London, 1852. Quote from: an earlier Christian History Institute article.