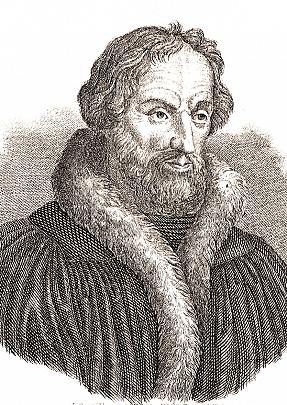 With the Turks encroaching into Europe, and European nations divided into Protestant and Catholic factions, Holy Roman Emperor Charles V needed to achieve some sort of unity of faith within his realm. Melanchthon drafted the Lutheran position which was then amended by other Lutherans. Lutheran princes presented this Confession of Augsburg, as it became called, to Charles on this day June 25, 1530. Article XX dealt with faith and good works. The Lutherans had been accused of forbidding good works—a charge they vehemently denied, pointing to their teaching on the Ten Commandments and other scriptures as evidence. The article explained why they emphasized faith and how works spring from faith.

Forasmuch, therefore, as the doctrine concerning faith, which ought to be the chief one in the Church, has lain so long unknown, as all must needs grant that there was the deepest silence in their [religious leaders before the Reformation] sermons concerning the righteousness of faith, while only the doctrine of works was treated in the churches, our teachers have instructed the churches concerning faith as follows:—

“First, that our works cannot reconcile God or merit forgiveness of sins, grace, and justification, but that we obtain this only by faith when we believe that we are received into favor for Christ’s sake, who alone has been set forth the Mediator and Propitiation, 1 Tim. 2, 5, in order that the Father may be reconciled through Him. 10] Whoever, therefore, trusts that by works he merits grace, despises the merit and grace of Christ, and seeks a way to God without Christ, by human strength, although Christ has said of Himself: I am the Way, the Truth, and the Life. John 14, 6….

“Heretofore consciences were plagued with the doctrine of works, they did not hear the consolation from the Gospel.…. Hence there was very great need to treat of, and renew, this doctrine of faith in Christ, to the end that anxious consciences should not be without consolation but that they might know that grace and forgiveness of sins and justification are apprehended by faith in Christ….

“Furthermore, it is taught on our part that it is necessary to do good works, not that we should trust to merit grace by them, but because it is the will of God. It is only by faith that forgiveness of sins is apprehended, and that, for nothing. And because through faith the Holy Ghost is received, hearts are renewed and endowed with new affections, so as to be able to bring forth good works. For Ambrose says: Faith is the mother of a good will and right doing. For man’s powers without the Holy Ghost are full of ungodly affections, and are too weak to do works which are good in God’s sight….

“Hence it may be readily seen that this doctrine is not to be charged with prohibiting good works, but rather the more to be commended, because it shows how we are enabled to do good works. For without faith human nature can in no wise do the works of the First or of the Second Commandment….”