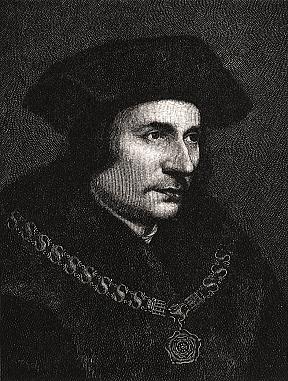 Sir Thomas More, once a close associate of King Henry VIII, fell afoul of the monarch when he refused to accept the annulment of Henry’s marriage to Catherine of Aragon, or to take the oath of supremacy that declared that Henry was the ruler of the Church of England. Henry’s solicitor general, Richard Rich, visited More in prison and afterward gave testimony at More’s trial, sealing the prisoner’s fate. More was charged with having “falsely, maliciously, and traitorously wished, willed, and desired, and by craft imagined, invented, practised, and attempted, to deprive the King of the dignity, title, and name of his royal estate, that is, of his title and name of supreme head of the Church of England.” Rich claimed that on this day 7 May, 1535, Thomas More uttered the following words in his hearing:

“The King our sovereign lord is not supreme head on earth of the Church of England.”