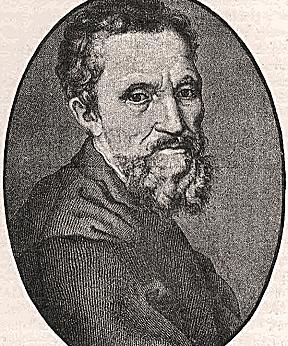 Michelangelo is famous as the painter of the Sistine Chapel ceiling. However, he required considerable persuasion before he got started. Pope Julius even had to exert pressure on the leaders of Florence, where Michelangelo was living at the time, to get him to undertake the work. Pietro Rosselli wrote his friend Michelangelo from Rome on this day, 6 May, 1506, to show him how matters stood in the eternal city.

“Last Saturday evening, when the Pope was at supper, I showed him some designs which Bramante and I had to test; so, after supper, when I had displayed them, he called for Bramante, and said: ‘San Gallo is going to Florence to-morrow, and will bring Michelangelo back with him.’ Bramante answered: ‘Holy Father, he will not be able to do anything of the kind. I have conversed much with Michelangelo, and he has often told me that he would not undertake the chapel, which you wanted to put upon him; and that, you notwithstanding, he meant only to apply himself to sculpture, and would have nothing to do with painting.’ To this he added: ‘Holy Father, I do not think he has the courage to attempt the work, because he has small experience in painting figures, and these will be raised high above the line of vision, and in foreshortening (i.e., because of the vault). That is something different from painting on the ground.’ The Pope replied: ‘If he does not come, he will do me wrong; and so I think that he is sure to return.’ Upon this I up and gave the man a sound rating in the Pope’s presence, and spoke as I believe you would have spoken for me; and for the time he was struck dumb, as though he felt that he had made a mistake in talking as he did. I proceeded as follows: ‘Holy Father, that man never exchanged a word with Michelangelo, and if what he has just said is the truth, I beg you to cut my head off, for he never spoke to Michelangelo; also I feel sure that he is certain to return, if your Holiness requires it.’”