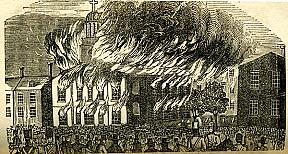 In May, 1844, Catholics and Protestants fought a religious war in Kensington, a suburb of Philadelphia. Protestants resented Catholic refusal to participate in Bible-reading at schools (Catholics protested since the reading was from the Protestant version [KJV] and not the Catholic version [Douai-Rheims]), and a rumor began circulating that Catholics wanted the Bible removed from the schools. Protestants organized a rally in a Catholic area on May 6. A Catholic shot one protestor. The next day a large group of Protestants descended into the Catholic neighborhood. When Catholics fired on them, the mob set fire to dozens of homes and wrecked many others. Three days of riots left $250,000 in property damage (about $5 million in 2015 dollars) and nine people dead, most of them Protestants. Protestants burned the St. Augustine church and cheered when its steeple collapsed. A local merchant named Thomas Cope reported the incident in his diary this day 8 May, 1844.

“10 o'clock—fire-engines out—State House bell ringing. A powerful light in the direction of St. Augustine, no doubt ’tis on fire. The flame ascends higher & the whole City is lighted up.”

“The Bible Riots of 1844: A Clash of Liberty and Equality.” Bill of Rights Institute.