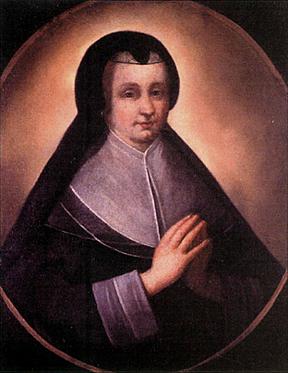 Madeleine de la Peltrie who brought a body of nuns from France to establish the Ursuline convent of Montreal.

Anti-Catholic sentiment was strong in mid-nineteenth-century America, owing in part to Protestant reaction to an influx of Catholic immigrants from Ireland, Germany, and Italy. There was an appetite for popular books written by individuals claiming to be escaped monks and nuns who wrote lurid accounts of monasteries and nunneries. One such tale was Sarah Richardson’s Life in the Grey Nunnery at Montreal. She claimed beatings and starvation at the hands of hypocritical priests and superiors, restrictions on communication, secret passageways that led to engines of torture in hidden cellars, and more. The story’s publisher, Edward P. Hood, perhaps recognizing that the tale’s gothic horrors were not believable, accompanied the book with a statement dated this day, 5 May, 1856, assuring the public that Sarah was an honest woman. Several appendices attempted to shore up the book’s claims with historical descriptions of Catholic abuses from around the world.

“To all whom it may concern. I hereby certify that I was personally acquainted with Sarah J. Richards, now Sarah J. Richardson, at the time she resided in Worcester, Mass. I first saw her at the house of Mr. Ezra Goddard, where she came seeking employment. She appeared anxious to get some kind of work, was willing to do anything to earn an honest living. She had the appearance of a person who had seen much suffering and hardship. She worked for Mr. Goddard a short time, when she obtained another place. She then left, but called very often; and during her stay in Worcester, she worked there several times. So far as I was able to judge of her character, I do not hesitate to say that she was a woman of truth and honesty. I heard her relate the account of her life and sufferings in the Grey Nunnery, and her final escape. I knew when the story was written, and can testify to its being done according to her own dictation. I have examined the manuscript, and can say that it a written out truly and faithfully as related by the nun herself.”

Richardson, Sarah J. Life in the Grey Nunnery at Montreal.