An Admission about Charles Finney - 1890 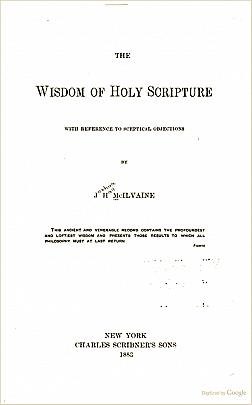 When Charles Finney became a Christian he abandoned his law studies and turned to evangelistic preaching instead. He emphasized intensive preparatory prayer, direct calls to listeners to repent and change the direction of their lives, daily meetings, and “anxious benches” for those in fervent prayer for their salvation Half a million people confessed Christ in his meetings. Because of his insistence that people could get right with God if they chose to, Finney was accused of teaching Arminianism at the very least if not Pelagianism (the idea that people can choose the good without Divine assistance). He also generated controversy by teaching that Christians can become sinless here and now (up to their knowledge). And, his “moral theory” of the atonement was considered heresy by some theologians, who consequently refused to have anything to do with him. J. H. McIlvaine (Joshua Hall McIlvaine, a prominent pastor, educator, and author) had been an opponent, but later changed his mind and wrote the following letter on this day, 4 May, 1890:

“In answer to your note of March 29th inquiring for particulars of Mr. Finney’s labors in Rochester while I was there, I am happy to say that I regard them as connected with the greatest work of grace I have ever seen in any of the churches. I was not in sympathy with it at the time, and would not admit Mr. Finney into the pulpit of the First Church, of which I was then pastor; but I have long been convinced that I was totally wrong, and have since taken occasion to say so to the church itself. During the revival Rochester rocked to its foundations. Great numbers of hopeful converts were added to all the churches during his labors. You are at liberty to make what use of these statements you please.”