England’s Bishops Stand up for Their Rights - 1253 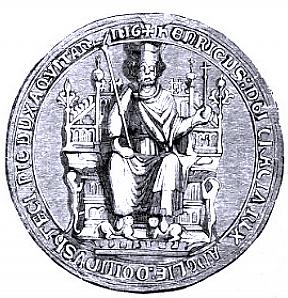 Henry III of England often broke his promises to uphold the Magna Carta, a famed document signed in 1215 that protected the rights of barons, of bishops, and, to a lesser extent, of all the English people. Therefore England’s barons, bishops, and abbots gathered to demand that he swear solemnly to uphold it. On this day, 3 May , 1253, they held lighted candles before them, listened as the charter was read, then pronounced a solemn excommunication on any leader who did not uphold it.

“The year of our Lord a thousand two hundred and fifty-three, the third day of May, in the great Hall of the King at Westminster in the presence, and by the assent, of the Lord Henry [and other participants]….By the authority of Almighty God, the Father, the Son, and the Holy Ghost, and of the glorious Mother of God, and perpetual Virgin Mary, of the blessed Apostles Peter and Paul, and of all apostles, of the blessed Thomas, Archbishop and Martyr, and of all martyrs, of blessed Edward of England, and of all Confessors and virgins, and of all the saints of heaven: We excommunicate, accurse, and from the thresholds of our Holy Mother the Church, We sequester, all those that hereafter willingly and maliciously deprive or spoil the Church of her right: And all those that by any craft or wiliness do violate, break, diminish, or change the Church’s Liberties, or the ancient approved customs of the Realm, and especially the Liberties and free Customs contained in the Charters of the Common Liberties, and of the Forest, conceded by our Lord the King, to Archbishops, Bishops, and other Prelates of England and likewise to the Earls, Barons, Knights, and other Freeholders of the Realm: And all that secretly, or openly, by deed, word, or counsel, do make statutes, or observe them being made, and that bring in Customs, or keep them when they be brought in, against the said Liberties, or any of them, the Writers and Counselors of said statutes, and the Executors of them, and a1l those that shall presume to judge according to them. All and every which persons before mentioned, that wittingly shall commit anything of the premises, let them well know that they incur the aforesaid sentence, ipso facto, [i. e. upon the deed being done.] And those that ignorantly do so, and be admonished, except they reform themselves within fifteen days after the time of the admonition, and make full satisfaction for that they have done, at the will of the ordinary, shall be from that time forth included in the same sentence. And with the same sentence we burden all those that presume to perturb the peace of our sovereign Lord the King, and of the Realm. To the perpetual memory of which thing, We, the aforesaid Prelates, have put our seals to these presents.”

Spooner, Lysander. An Essay on the Trial by Jury.