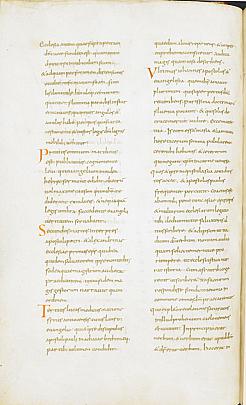 Robert Harley, a statesman who became the first Earl of Oxford, accumulated a vast library that included much rare material. His librarian, Humphrey Wanley, knew the sale catalogs of Europe’s booksellers as few other men did and was constantly on the lookout for items to add to his employer’s holdings at the least possible expense. One of the items he acquired—number 2788 in the Harleian collection—was the Codex Aureus or Golden Gospels. Monks produced many beautiful Bible manuscripts in the Middle Ages, several of which received the name Codex Aureus for their gold lettering. Here is the note Wanley made in his diary on this day, 14 May, 1720, indicating his intention to acquire this particular rare treasure.

“Yesterday Mr. Vaillant (a bookseller) brought me a specimen of the characters of that Latin MS of the Gospels, which is to be sold at the approaching auction of Menare’s books at the Hague. These characters are all uncials, gilded over with gold, and appear to be formed in very elegant manner. Among them I observe A, G, V, M and E so shaped, which is not commonly seen in the body or text of old MSS, although frequent in the title or Rubrics. In my opinion this most ancient and valuable book should be purchased at any rate [i.e., at any price].”