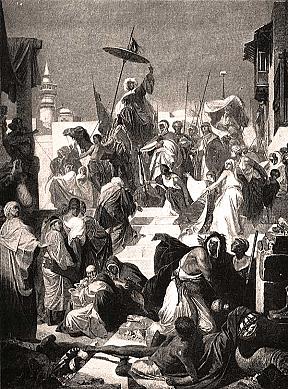 On this day, April 7, 1321 Brother Thomas of Tolentino and three other Franciscans witnessed for Christ. On either the 8th or 9th of April, after torture, they were beheaded. Traveling toward China the party had been detained near Bombay. A local Cadi summoned them to discuss religion. Thomas and his associates upheld the divinity of Christ. The Cadi then demanded to know what they thought of Mohammed. Thomas replied that since Mohammed’s claims did not square with Christ’s, the Cadi, if he were wise, should be able to determine what to think of him. The Cadi and his attendants would not accept this evasive reply but demanded a direct response. The answer below, when it came, caused the Muslims to shout that Thomas had blasphemed the prophet and to call for his death.

“Since ye can only repeat What do I say of him, I should blush to refuse the reply ye seek. I reply then, and tell you that Muhammad is the son of perdition and has his place in hell with the devil his father, and not he only but all such as follow and keep his law, false as it is, and pestilent and accursed, hostile to God and the salvation of souls.”

The quote is from Cathay and the Way Thither: Being a Collection of Medieval Notices of China. The date is from Internet encyclopedias and saints’ sites.