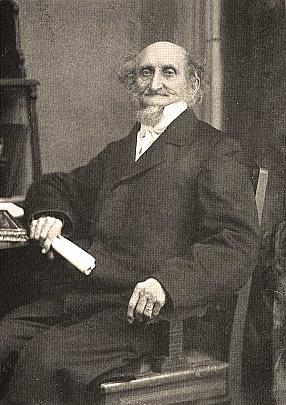 German-born Carl Ferdinand Wilhelm Walther became a leader of Lutherans in the Midwestern United States (still a frontier in the mid-19th century) and a founder of the Missouri Synod of Lutherans. His health failed under his heavy work load and he sailed back to Germany for a vacation. On that voyage he wrote an Easter hymn which was later translated into English by Anna M. Meyer. His own note says, “on the first Easter Day, April 8, 1860, on the Ocean.”

“The Foe was triumphant when on Calvary
The Lord of creation was nailed to the tree,
In Satan’s domain did the hosts shout and jeer,
For Jesus was slain, whom the evil ones fear.

“But short was their triumph, the Savior arose,
And death, hell, and Satan He vanquished, His foes;
The conquering Lord lifts His banner on high.
He lives, yea, He lives, and will nevermore die.

“Oh, where is thy sting, Death? We fear thee no more;
Christ rose, and now open is fair Eden’s door.
For all our transgressions His blood doth atone;
Redeemed and forgiven, we now are His own.

“Then sing your hosannas and raise your glad voice;
Proclaim the blest tidings that all may rejoice.
Laud, honor, and praise to the Lamb that was slain,
Who sitteth in glory and ever shall reign.”