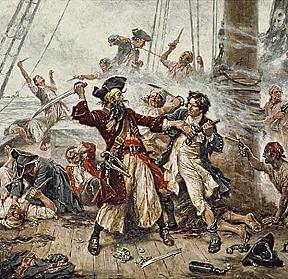 This painting depicts the capture of Blackbeard the pirate.

According to a nineteenth-century pamphlet, Caribbean pirates captured the sloop Eliza Ann while it was sailing from St. Johns to Antigua. Lucretia Parker was the only woman among those captured. The pirates murdered all the men in cold blood the following day but spared Lucretia. Shortly afterward, a British man of war captured most of the pirates. Four who escaped took Parker with them to Jamaica where she was able to identify several imprisoned pirates whom the British immediately hung. On this day, April 3, 1825, she wrote a lengthy letter from St. Johns to a brother in New York describing her ordeal.

“You have undoubtedly heard of my adverse fortune, and the shocking incident that has attended me since I had the pleasure of seeing you in November last.….

[After her capture Parker was locked in a cabin]

“It is indeed impossible for me, brother, to paint to your imagination what were my feelings at this moment; being the only female on board, my terror it cannot be expected was much less than that of the poor devoted mariners! I resigned my life to the Being who had lent it, and did not fail to improve the opportunity (which I thought it not improbable might be my last), to call on Him for that protection, which my situation so much at this moment required—and never shall I be persuaded but that my prayers were heard….

“There appeared now but one alternative left me, which was to offer up a prayer to Heaven for the protection of that Being who has power to stay the assassin’s hand, and ‘who is able to do exceeding abundantly above what we can ask or think,’—sincerely in the language of scripture I can say, ‘I found trouble and sorrow, then called I upon the name of the Lord’ …”