A Glimpse of Christianity in 19th-Century Lebanon - 1812 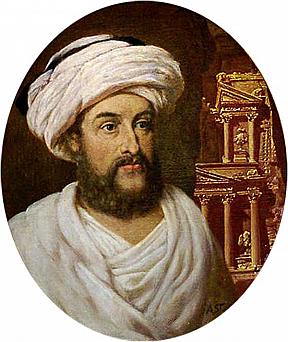 Early in the nineteenth century, the African Association employed Johann Ludwig Burckhardt to investigate Africa for them. To make his task easier, they wanted him to pass as an Arab so that he could travel the Arab trade routes on the continent. Consequently Burckhardt spent three years in the Middle East, honing his language skills and improving his knowledge of Arabic culture. His explorations located the lost ruins of Petra. Unfortunately, he died in Cairo before he could make extensive use of his training. The association published the notes he made of his travels in out-of-the-way parts of Syria. Today’s excerpt is from this day March 16, 1812, a stage in a tour he took from Aleppo to Damascus.

“I slept at Harissa, and left it early in the morning, to visit Ayn Warka. The roads in these mountains are bad beyond description, indeed I never before saw any inhabited country so entirely mountainous as the Kesrouan: there are no levels on the tops of the mountain; but the traveller no sooner arrives on the summit, than he immediately begins the descent; each hill is insulated, so that to reach a place not more than ten minutes distant in a straight line, one is obliged to travel three or four miles, by descending into the valley and ascending again the other side. From Harissa I went north half an hour to the village Ghosta, near which are two convents called Kereim and Baklous. Kereim is a rich Armenian monastery, in which are twenty monks. The silk of this place is esteemed the best in Kesrouan. A little farther down is the village El Basha. One hour and a quarter Ayn Warka, another Maronite convent. I wished to see this place, because I had heard that a school had lately been established here, and that the convent contained a good library of Syrian books; but I was not so fortunate as to see the library; the bishop, although he received me well, found a pretext for not opening the room in which the books are kept, fearing, probably, that if his treasures should be known, the convent might some day be deprived of them. I however saw a beautiful dictionary in large folio of the Syriac language, written in the Syriac character, which, I suppose, to be the only copy in Syria. Its author was Djorjios el Kerem Seddany, who composed it in the year 1619.”

Burckhardt, John. Travels in Syria and the Holy Land.