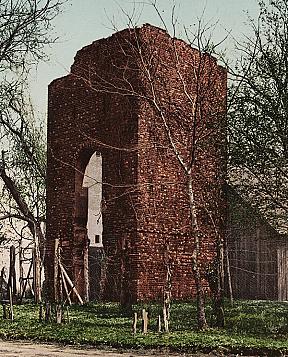 A ruined church in Jamestown.

Throughout the seventeenth century, there was a shortage of  ministers for the official church of Virginia (the Church of England) in the Chesapeake region. By mid-century, only twenty percent of parishes were supplied with a minister. This prompted the colony of Virginia to offer a reward on this day, 1 December 1656, to anyone who brought a “sufficient minister” into the colony. Ironically, at the same time, unnofficial ministers such as Puritans, Baptists, and Quakers were being persecuted by the authorities, sometimes severely.

“WHEREAS many congregations in this collony are destitute of ministers whereby religion and devotion cannot but suffer much impairment and decay, which want of the destitute congregations ought to be supplied by all meanes possible to be vsed, As also to invite and encourage ministers to repaire hither and merchants to bring them in, Bee it therefore hereby enacted for the reasons aforesaid, that what person or persons soever shall at his or their proper cost and charge transport a sufficient minister into this collony without agreement made with him shall receive for satisfaction of his or their said charges of him the said minister or that they shall entertaine him for their minister, twenty pound sterling by bill of exchange or two thousand pounds of tobacco, and also for what money shall be disbursed for them besides their transportation to be allowed for.”