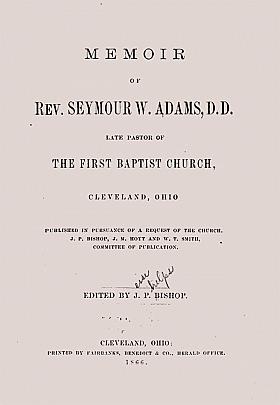 Seymour W. Adams was typical of the best Christian leaders of nineteenth-century America. His integrity was acknowledged and admired by all. As a young man he studied and became the Baptist pastor of his home church at Vernon, New York. In 1846, First Baptist in Cleveland, Ohio, invited him to pastor their church. He accepted and preached his first sermon there on this day, 22 November 1846. Although shy, he oversaw such growth that the church had to build a bigger building. In 1864 he died of typhoid contracted while nursing soldiers in the Civil War. Considering the church scandals that make news today, the standard Adams set himself could be imitated with profit. Here is an excerpt from his inaugural sermon, based on Hebrews 8:17, “For they watch for your souls as they that must give account.” After reminding his congregation that the people in the pews have Christian duties as well as the pastor, he expounded on his text:

“The words chosen for this purpose will lead me to speak, first, of the objects of [a pastor’s] solicitude; secondly the officiating character; thirdly the mode of operation.

“First, the objects of pastoral vigilance, what are they? The text furnishes the reply—‘They watch for your souls.’ …

“… I am to speak of the officiating character. Who is he, or what should he be? … He is at best but a man. … Every Christian is under the most solemn obligations to live a holy life, and what more is demanded of a minister? … Reason unites with revelation to support the idea, that the minister’s life should be such, that when copied by those attendant upon his labors, no cause of shame should be seen. Weight of character is certainly needed here, if anywhere, for he stands upon a focal point. Influence is streaming forth, like light from yonder orb, to bless mankind, by conducting them to the Fountain of all Good, or leading them away captive, into regions of darkness and death. …

“It now remains to notice the method in which the pastoral vigilance is to be exercised. … The means which God has placed in their hands, are such as appeal to the understanding—that operate upon the heart and conscience. Truth is that powerful instrument which they are to wield. The preaching of ‘Christ, and him crucified,’ is the pre-eminent truth that embodies the elements of good to immortal minds.”