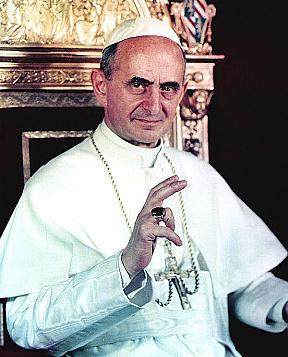 Early in the fourteenth century, Boniface VIII issued the bull Unam Sanctam that excluded from salvation anyone who rejected the authority of the pope: “Furthermore, we declare, we proclaim, we define that it is absolutely necessary for salvation that every human creature be subject to the Roman Pontiff.” While directed chiefly at Philip IV of France, the bull also specifically mentioned Eastern Orthodox peoples who had split with the Catholic Church in the eleventh century. Many later anathemas at the Council of Trent (1545-1563) also targeted individuals who held specific Protestant views, such as justification by faith alone and rejection of the apocryphal books of the Bible, cutting them off from the Roman Catholic Church, out of which official doctrine had long taught there could be no salvation. On this day 21 November 1964, as a result of Vatican II, Pope Paul VI issued a statement that seemed to soften the Catholic position.

“The Church recognizes that in many ways she is linked with those who, being baptized, are honored with the name of Christian, though they do not profess the faith in its entirety or do not preserve unity of communion with the successor of Peter. … They are consecrated by baptism, in which they are united with Christ. … Likewise we can say that in some real way they are joined with us in the Holy Spirit, for to them too He gives His gifts and graces whereby He is operative among them with His sanctifying power. … In all of Christ’s disciples the Spirit arouses the desire to be peacefully united, in the manner determined by Christ, as one flock under one shepherd, and He prompts them to pursue this end. Mother Church never ceases