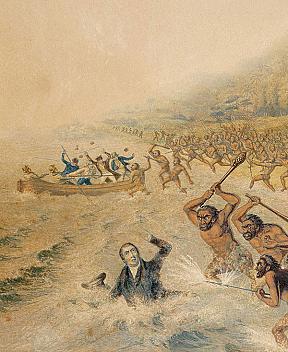 Martyrdom of John Williams. (The artist has taken liberty with the written account.)

John Williams was a Protestant missionary in the South Seas. Although he and his wife were the first missionaries to set foot on Samoa, most of their work was done on the other side of the Pacific in the New Hebrides islands. Williams learned several local languages and managed a trading ship. He was murdered on the island of Erromanga on this day, 20 November 1839. Here is the account written by Robert C. Morgan, one of his co-workers to Rev. W. Ellis another co-worker.

“Dear Sir,—I have to communicate to you the painful intelligence of the death of your beloved brother and faithful missionary, the Rev. John Williams, who was massacred at the island of Erromanga, one of the New Hebrides, on the 20th of November, 1839, and of Mr. James Harris, a gentleman who was on his way to England, with a view of becoming a missionary. . . .

"Mr. Williams remarked, he saw a number of native boys playing, and thought it a good sign, as implying that the natives had no bad intentions: I said, I thought so too, but I would rather see some women also; because when the natives resolve on mischief they send the women out of the way; there were no women on the beach. At last he got up, went forward in the boat, and landed. He presented his hand to the natives, which they were unwilling to take; he then called to me to hand some cloth out of the boat, and he sat down and divided it among them, endeavouring to win their confidence. All three walked up the beach, Mr. Harris first; Mr. Williams and Mr. Cunningham followed. After they had walked about a hundred yards, they turned to the right, alongside of the bush, and I lost sight of them. Mr. Harris was the farthest off. . . . I stopped to see the boat anchored safely, and then walked up the beach towards the spot where the others had proceeded; but before I had gone a hundred yards, the boat's crew called out to me to run to the boat.

“I looked round, and saw Mr. Williams and Mr. Cunningham running; Mr. Cunningham towards the boat, and Mr. Williams straight for the sea, with one native close behind him. I got into the boat, and by this time two natives were close behind me, though I did not see them at the moment. By this time Mr. Williams had got to the water, but, the beach being stony and steep, he fell backward, and the native struck him with a club, and often repeated the blow; a short time after, another native came up and struck him, and very soon another came up and pierced several arrows into his body.”