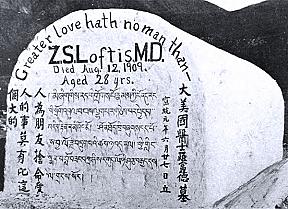 Inspired by a story of martyrdom in Tibet, Zenas Loftis determined to become a medical missionary. He studied medicine at Vanderbilt while working part-time jobs to support himself. In 1908 he sailed for Asia, bound for Tibet. He reached China in about two months, but it took him several more months to reach the mountain nation that was his destination. By 12 August 1909 he was dead, having contracted smallpox and typhus. Here is a report from his diary dated this day 7 October 1908.

“Out in the Yellow Sea! The last day on the ocean. To-morrow I reach the land which henceforth is to be my home. I begin a new life tomorrow. The same person, but a new life. I leave America behind when I leave the Mongolia. May God help me to be worthy of the charge. To-night I went out on the prow and enjoyed the beauty of the sea. The moon was almost a cloud, flooding the sea with silver. When it would disappear I could see the phosphorescence in the water to better advantage. It was very bright, and the ship seemed plowing through a sea of fire. The ship has now anchored off the bar waiting for morning. I feel happy to know that to-morrow will mark a new era in my life. I leave old friends and scenes, and enter upon an entirely new field of work. May God bless my efforts, and help me to be humble and prayerful.”