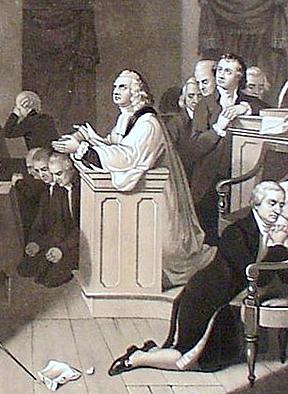 Jacob Duche in a happier moment, leading Congress in prayer.

The Reverend Jacob Duche offered prayer before the first Continental Congress in 1774 and followed it with such a stirring, patriotic speech that Congress voted him thanks. However, on this day 8 October 1777, alarmed by the course of events and the failures of American arms against the British, he wrote a long letter to George Washington, declaring he [Duche] had never been in favor of American independence, that the colonies had been mistaken to take up arms, that the British were unbeatable, that France would not come into the war on the side of the United States, and that no eminent persons were left to support Washington. He urged Washington to give up the fight.

Washington, however, forwarded Duche’s letter to Congress, disowning its sentiments. When the letter was printed, Duche fled to England where he became a successful writer and preacher. Americans declared him a traitor and seized his property but he returned to Philadelphia in 1790.

“May Heaven inspire you with this glorious resolution of exerting your strength, at this crisis, and immortalizing yourself as friend and guardian to your country! Your penetrating eye needs not more explicit language to discern my meaning. With that prudence and delicacy, therefore, of which I know you possessed, represent to Congress the indispensable necessity of rescinding the hasty and ill-advised declaration of independency. Recommend . . . an immediate cessation of hostilities. . . . Let men of clear and impartial characters, in or out of Congress, liberal in their sentiments, heretofore independent in their fortunes . . . be appointed to confer with his Majesty’s Commissioners. Let them, if they please, propose some well-digested constitutional plan, to lay before them at the commencement of the negotiation. When they have gone thus far, I am confident the usual happy consequences will ensue; unanimity will immediately take place through the different provinces; thousands who are now ardently wishing and praying for such a measure, will step forth, and declare themselves the zealous advocates for constitutional liberty; and millions will bless the hero that left the field of war, to decide this most important contest with the weapons of wisdom and humanity. . . .

“If the arguments made use of in this letter should have so much influence as to engage you in the glorious work which I have warmly recommended, I shall ever deem my success the highest temporal favor that Providence could grant me. . . .

“With the most ardent prayers for your spiritual as well as temporal welfare, I am your most Obedient and humble friend and servant, Jacob Duche”

Correspondence Of The American Revolution; Being Letters Of Eminent Men To George Washington, From The Time Of His Taking Command Of The Army To The End Of His Presidency. Edited from the original manuscripts by Jared Sparks, Volume I, Boston, Little Brown, and Company. (1853) pp 448-458.