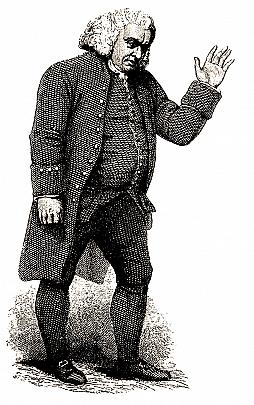 Samuel Johnson is famous as an author and the compiler of the first really good English-language dictionary, but above all for his witty conversations recorded by James Boswell. Converted to Christian faith as a young man by reading William Law’s Serious Call to a Devout and Holy Life Johnson was devout, wrote prayers, regularly attended church, and reached out a helping hand to the poor. He maintained several old people in his home and once rescued a prostitute he found dying in the snow, carrying her home on his back. The letter that follows was written on January 20, 1780 to his friend Dr. Lawrence whose wife had recently died.

“DEAR SIR,— At a time when all your friends ought to shew their kindness, and with a character which ought to make all that know you your friends, you may wonder that you have yet heard nothing from me. I have been hindered by a vexatious and incessant cough, for which within these ten days I have been bled once, fasted four or five times, taken physick five times, and opiates, I think, six. This day it seems to remit.

“The loss, dear Sir, which you have lately suffered, I felt many years ago, and know therefore how much has been taken from you, and how little help can be had from consolation. He that outlives a wife whom he has long loved, sees himself disjoined from the only mind that has the same hopes, and fears, and interest; from the only companion with whom he has shared much good or evil; and with whom he could set his mind at liberty, to retrace the past or anticipate the future. The continuity of being is lacerated; the settled course of sentiment and action is stopped; and life stands suspended and motionless, till it is driven by external causes into a new channel. But the time of suspense is dreadful.

“Our first recourse in this distressed solitude, is, perhaps for want of habitual piety, to a gloomy acquiescence in necessity. Of two mortal beings, one must lose the other; but surely there is a higher and better comfort to be drawn from the consideration of that Providence which watches over all, and a belief that the living and the dead are equally in the hands of God, who will reunite those whom he has separated; or who sees that it is best not to reunite. I am, dear Sir, your most affectionate, and most humble servant,