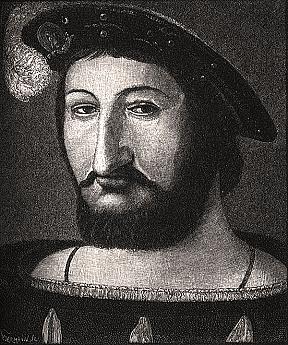 King Francis I indulged and then persecuted French Protestants.

In October 1534, reformers posted anti-Catholic placards throughout France. Someone even affixed one to the door of King Francis I bedroom. In a fury the self-indulgent king commanded, “Let all be seized, and let Lutheranism be totally exterminated!” Terrible persecution followed. On January 21, 1535 the king walked as a penitent in a solemn procession among priests and relics, mourning for the leniency he had previously shown the reformers and the blasphemy of the placards. Afterward he made a speech, bits of which have come down to us. Finally he witnessed the torture of several Protestants who were repeatedly lowered into and raised from a fire.

“Oh, the crime, the blasphemy, the day of sorrow and disgrace! Oh, that it had never dawned upon us…What a disgrace it will be if we do not extirpate these wicked creatures! If you know any person infected by this perverse sect, be he your parent, brother, cousin, or connection, give information against him. By concealing his misdeeds you will be partakers of that pestilent faction…I give thanks to God that the greatest, the most learned, and undoubtedly the majority of my subjects, and especially in this good city of Paris, are full of zeal for the Catholic religion…I warn you that I will have the said errors expelled and driven from my kingdom, and will excuse no one…As true, Messieurs, as I am your king, if I knew one of my own limbs spotted or infected with this detestable rottenness, I would give it you to cut off…And farther, if I saw one of my children defiled by it, I would not spare him…I would deliver him up myself, and would sacrifice him to God.”