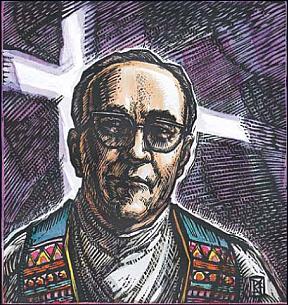 Oscar Romero from the cover of Violence of Love.

Oscar Romero was the Catholic archbishop of violent El Salvador. He spoke out against the nation’s brutal military dictatorship. In his weekly radio sermons, he listed disappearances, tortures, murders and other news that the national press was too afraid to report. The common people hung on his words. In March 1980, an assassin killed him while he was saying Mass. Afterward, Jesuit James R. Brockman compiled a number of extracts from Romero’s sermons and titled them The Violence of Love. Today’s selection is taken from the broadcast of Sunday, January 15, 1978.

“This is the mission entrusted to the church,
a hard mission:
to uproot sins from history,
to uproot sins from the political order,
to uproot sins from the economy,
to uproot sins wherever they are.
What a hard task!
It has to meet conflicts amid so much selfishness,
so much pride,
so much vanity,
so many who have enthroned the reign of sin among us.
The church must suffer for speaking the truth,
for pointing out sin,
for uprooting sin.
No one wants to have a sore spot touched,
and therefore a society with so many sores twitches
when someone has the courage to touch it
and say: ‘You have to treat that.
You have to get rid of that.
Believe in Christ.
Be converted.’”